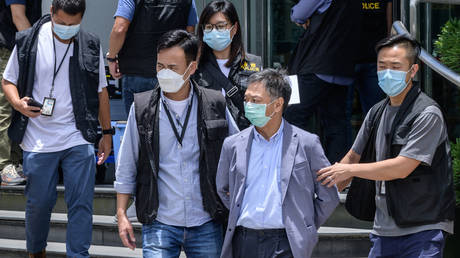 Police in Hong Kong have charged two senior bosses of the Apple Daily newspaper with “collusion with a foreign country” after officers entered the publication’s offices on Thursday and arrested five members of staff.

As many as 500 police raided the tabloid, which is aligned with the ‘pro-democracy’ movement, according to Reuters.

Those detained are accused of violating dozens of articles of Hong Kong’s new security law, passed by China last year, which criminalizes a number of actions including collusion.

Police said in a statement on Friday they had charged two men with violating the National Security Act and that the pair will be questioned on Saturday at West Kowloon Magistrates’ Courts. Apple Daily identified those charged as publisher Cheung Kim-hung and editor-in-chief Ryan Law.

The paper said it was the first such instance of journalists in Hong Kong being prosecuted for national security breaches.

Police said they were questioning three other people arrested in Thursday’s raid, who according to Apple Daily, were later released on bail. They were named as chief operating officer Chow Tat-kuen, deputy chief editor Chan Puiman and chief executive editor Cheung Chi-wai.

Hong Kong’s National Security Act has generated both controversy and major protest since it was passed by Chinese national parliamentary officials in June 2020.

Critics have accused Beijing of using the law to stifle dissent in the former British colony, which reverted to Chinese rule in 1997. However, Beijing has said the legislation is necessary for security and law enforcement reasons.

On Friday, Chinese Foreign Ministry Spokesperson Zhao Lijian told a press conference the law “protects the rights and freedoms” of Hongkongers after being asked about the arrests at Apple Daily.