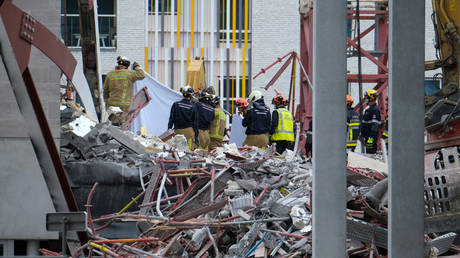 Rescuers in the Belgian city of Antwerp have found the bodies of five construction workers after an unfinished school building partially collapsed on Friday, also injuring a dozen people and burying others under rubble.

The incident in the northern city occurred when the part of the building still under construction abruptly collapsed.

Footage from the scene, apparently taken moments after the collapse, shows a section of the building torn clear off, with dust rising into the air. the building’s roof has partially collapsed as well, falling onto its top floor.

Part of the school could be seen effectively flattened, having apparently fallen into its own footprint. The accident also destroyed scaffolding attached to the collapsed part of the building, with only a mess of mangled steel tubes left visible.

Five construction workers left trapped under the rubble were initially pronounced missing, and a massive rescue operation commenced with multiple emergency services involved. They announced on Saturday that all five had unfortunately been found dead.

Announcing “very bad news,” the city’s fire department lamented in a tweet that the accident had taken a “very heavy toll,” adding that they had the victims’ families in their thoughts.

The area around the construction site has been cordoned off and will remain closed after the rescue operation ends, allowing investigators to inspect the building. So far, no official information on the causes of the collapse has emerged.