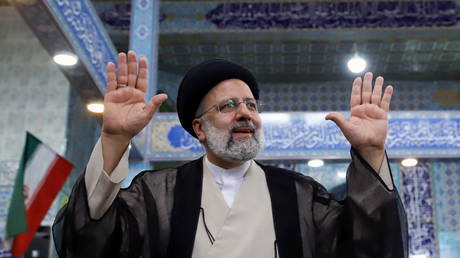 Candidates in Iran’s presidential election have conceded the race to hardliner Ebrahim Raisi. Outgoing President Hassan Rouhani has also issued his congratulations, although the results have not yet been made official.

Raisi, the current chief justice of Iran, was the clear frontrunner heading into the polls. Voting began on Friday and continued into the early hours of Saturday. Although Tehran has yet to officially declare a winner, Raisi’s political opponents have already accepted defeat.

“I hope your government, under the leadership of Supreme Leader Ayatollah Ali Khamenei, will bring comfort and prosperity to our nation,” former central bank chief Abdolnasser Hemmati wrote in a congratulatory message to Raisi.

“Because it has not been officially announced yet, I will delay the official congratulations. But it is clear who received the votes,” Rouhani said.

Rouhani, viewed as moderate, is barred from running again due to legal limitations allowing only two consecutive four-year terms, which he has already served.

Raisi’s presumed victory could further exacerbate relations with the United States. The hardliner was targeted by US sanctions in 2019 after he was appointed Iran’s judiciary chief. Washington claimed that he was involved in the execution of political prisoners in the 1980s, and also participated in suppressing civil unrest in the late 2000s.