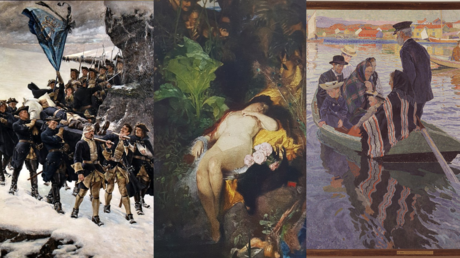 The Swedish National Museum is under fire for attaching “warning labels” to classic pieces of art, tipping viewers off about the dangerous “nationalism,” racism, and “patriarchal gender roles” apparently hidden on canvas.

From reimagining its viking warriors as “transgender” to hanging homosexual art in its churches, to declaring its own history “copied,” Swedish society has apparently committed itself to a full-throttle woke makeover in recent years. The Swedish National Museum in Stockholm is no different.

Gustaf Cederström’s world-famous painting ‘Bringing Home the Body of King Carl XII of Sweden’, for example, is accompanied by a miniature social sciences treatise stating: “The populist and nationalist view of Swedishness, which is used politically today, is based on the idea of a statically idealised and constructed past. The idea that there is a historical time and place to look back on, where everything was in a certain way, is not true.”

Heaven forbid the audience would see the procession of royal banners in the painting and feel a stirring of patriotism.


Anders Zorn’s ‘Midsummer Dance’, which depicts peasants dancing in a field, gets a “warning for nationalism.” Yet the warnings don’t stop at depictions of country life. Even paintings of Sweden’s wild landscapes are apparently rife with nationalism. One realistic landscape painting is described as “an almost unreal idyll,” while another – this one depicting a cascading waterfall – is described as using “powerful nature” as “part of a nationalist movement.”

Others are racist by association. Carl Wilhelmson’s classic painting ‘Churchgoers in a Boat’ features a group of typically white Swedes in rural dress, but is described as racist, because it was painted at a time when “anthropological racial research” was being carried out.

‘Churchgoers in a Boat,’ by Carl Wilhelmson, 1909 © Wikipedia


The museum also has a dim view of 19th century gender relations, and views art from this period through a distinctly modern lens. A simple painting of a house is criticized because the male homeowner apparently slept in a “huge four-poster bed, while [his wife] slept in the room next door with the children, in a single bed.” This inequality is simply attributed to “nationalism.”

A painting of a nude nymph and two fauns in a forest is described as showing “how 19th-century viewers were schooled into the ‘male gaze’ tradition. The fauns look at the naked female figure as a game.”

Dozens of similar “warnings” abound. 20th century art, however, is described completely differently. After World War II, art and design “just like society at large, are democratized and reflect an increasing diversity,” one sign on a collection of mid-century paintings reads, while others tout the country’s progress toward a more egalitarian society.

How have these “politicized” labels gone down with Swedes? Not well, according to some online reaction to Gren’s article. “The permanent exhibition is therefore one great left-wing indoctrination – funded by our tax money,” one commenter complained.

“This madness will continue until everything in Swedish culture is branded racist. Everything that makes us Swedes proud of our cultural heritage must be branded racist by these state-sanctioned left-wing extremists,” another ranted. “We gave them the finger, they took our hand!”

“​Is everything Swedish racist? Those of you who think so, why do you still choose to live in such a racist country?” another asked.