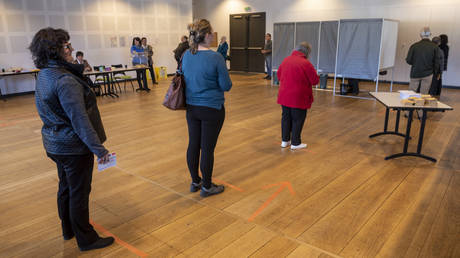 Exit polls from the first round of results in the country’s regional election have shown it was a disappointing night for French President Emmanuel Macon’s LREM party and for right-wing politician Marine Le Pen’s National Rally group.

Asked if the 11% support for the party could be seen as a failure, Interior Minister Darmanin said that it was “of course,” adding the group faces “an important hurdle” ahead of next year’s presidential contest.

LREM had warned last month that, as the party currently in power, it was not expecting to do well in its first regional elections since its formation five years ago. Predicting how the party would do, an LREM minister told reporters in May that “these elections are never good for the party in power. You always get it in the neck.”

Also on rt.com
Can Le Pen take the French presidency? This weekend will tell us a lot…and Macron is right to be worried

Darmanin, who joined LREM in 2017, focused his disappointment on the record low turnout in the country’s election, stating that “no-one can be happy when there is a 70% abstention rate, rising to over 80% among young people.”

The interior minister called the poor turnout “a defeat for all of us,” highlighting how the record levels of abstention show that “the French people are telling politicians they do not trust them.”

Le Pen’s National Rally party, which had been predicted to secure the largest share of the vote and to win one region in the first round of polling, dropped to second place in the exit poll. Gaining just 19% of the vote, the group fell short of expectations, in an election that Le Pen called a “civic disaster.”

The exit polls suggest a resurgence for the center-right Les Republicains, which won 27.2% of the national vote, followed by the National Rally’s 19.3% and then the Green Party, Socialist Party and LREM, which all secured around 11%.