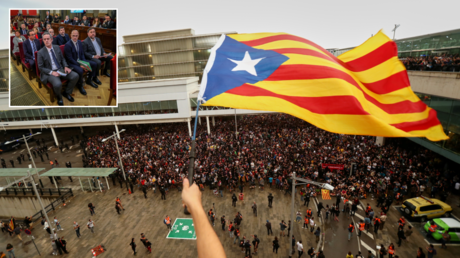 Prime Minister Pedro Sanchez’s office has announced that pardons for nine jailed Catalan separatist leaders, who’d been handed sentences ranging from nine to 13 years behind bars, have been approved by Spain’s cabinet.

In a tweet published on his official account, Sanchez said the nine had received partial pardons, commuting their prison sentences but upholding their disqualification from holding office.

The move is aimed at putting Spain on the path to reconciliation as the country’s “government works for understanding, not for confrontation,” Sanchez said, adding that he hoped all sides could now “concentrate on improving the lives of our people” as the nation emerged from the Covid-19 pandemic.

The pardons had been rumored in recent weeks and were revealed on Monday, ahead of their final sign-off, with Sanchez justifying them by saying that “confrontation doesn’t serve to solve any problem.”

It’s not clear exactly when the jailed separatists will be released from prison – the authorities have simply said they would work quickly to finish the administrative steps required to secure their freedom.

The nine separatists were jailed for sedition by Spain’s Supreme Court in October 2019, with several others fleeing abroad to avoid prosecution, including Catalonia’s former president Carles Puigdemont, who was recently granted political asylum in Morocco.

Pro-separatist figures have dismissed the reconciliation attempt as a political stunt, claiming that, if Sanchez was serious about moving forward, his government would have granted full amnesty to all who were involved in the 2017 independent effort, allowing those abroad to return to the region.

The division within Spain and the prosecution of the separatists came after Catalonian officials attempted to hold an unauthorized referendum in 2017, as part of their bid to secure independence from Madrid, sparking charges of sedition from the Spanish authorities.