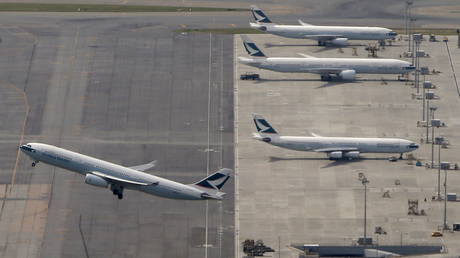 Authorities in China have canceled flights from the Covid-hit southern city of Shenzhen until at least July 1, ahead of planned celebrations in the capital marking the anniversary of the founding of the Chinese Communist Party.

On Wednesday, booking apps showed that flights to Beijing from Shenzhen, a city in China’s most populous province Guangdong, had been cancelled for at least another eight days.

Speaking to Reuters, a Shenzhen government official and two airline representatives confirmed that flights to the capital had been suspended. Flights to other parts of the mainland are continuing as normal.

The province has been battling a resurgence of Covid-19, with authorities claiming that there have been 170 confirmed local cases between May 21 and June 21. While only eight cases were recorded in Shenzhen, the provincial capital of Guangzhou has reported 146 infections.

The airport at Foshan city, which borders Guangzhou, announced that it would be suspending all flights until July 7, having registered 12 cases last month.

On July 1, China will celebrate the 100th anniversary of the founding of the Chinese Communist Party, with events planned in the capital. Tiananmen Square will be closed for a week for the construction of stands and other objects used in the celebration activities. The square will reopen on July 2.

China has largely been able to control the outbreak of Covid-19 since the first wave was discovered in Wuhan in late 2019. The country has now administered more than one billion vaccines in the fight against the virus.