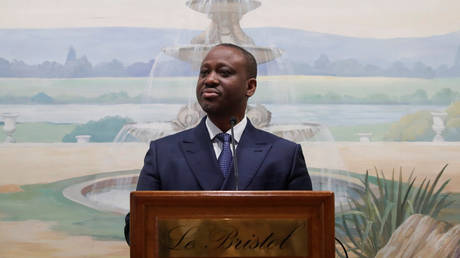 An Ivory Coast court has handed a life sentence to former Prime Minister Guillaume Soro in absentia over charges of conspiracy and an attempted attack on state authority over an alleged coup against President Alassane Ouattara.

The former PM and rebel leader had been charged – along with 19 of his supporters – with conspiracy, attempting to undermine the authority of the state, and the dissemination and publication of false news, resulting in damage to public morale.

The judge overseeing the case before the criminal court of Abidjan agreed with the prosecutor to hand down a life sentence in absentia for undermining national security and plotting a coup against the incumbent president – a former ally of Soro.

He and his legal team have denied the charges leveled against him, saying the case was a politically motivated prosecution that presented no evidence of Soro’s supposed guilt.

Having served as Ivory Coast’s prime minister from 2007 to 2012, and currently leader of the Patriotic Movement, Soro has been living in exile in Europe. He was sentenced in April 2020 to 20 years in prison and fined $7.6 million in a separate case in Ivory Coast over charges of embezzlement and money laundering.

Prior to the prosecutions, Soro had announced from Europe that he was planning to run for Ivory Coast’s presidency, but was ultimately barred from doing so as his first conviction saw him disqualified from public office. He has remained in exile in Europe since mid-2019 when he abandoned his planned return to Ivory Coast after authorities there issued a warrant for his arrest over the accusations of endangering state security.