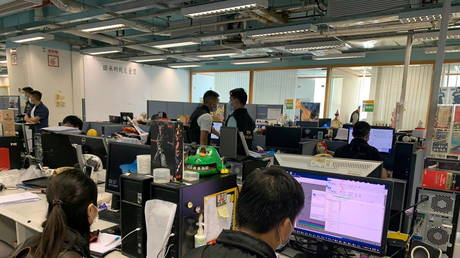 Apple Daily, a Hong Kong-based newspaper, has announced that it is permanently closing days after hundreds of police officers raided its offices and froze its assets over allegations its breached China’s national security law.

Announcing the decision to shut down the publication, Apple Daily’s management said it will “cease operation immediately after midnight” over concerns about “staff members safety.” The publication’s Thursday edition will be the newspaper’s final printed copy.

The statement from the management team was paired with a message posted by publisher Next Digital on the newspaper’s website thanking readers for their support.

On Monday, Apple Daily’s parent company warned that it would have to close the newspaper if Hong Kong did not unfreeze the tabloid’s assets. Without access to its finances, the newspaper is unable to pay its employees at the end of the month, putting it at risk of breaching labor laws.

Last week, Hong Kong authorities raided Apple Daily’s office over accusations that it has engaged in “collusion with a foreign country,” breaching the national security law that was implemented in the wake of the 2019 anti-Beijing protests.

Following the police action, several executives at the newspaper were taken into custody, including its CEO, COO, and chief editor, with authorities freezing HK$18 million (US$2.32 million) in assets.

Steve Li, a superintendent at Hong Kong’s national security unit, used a press conference last Thursday to accuse Apple Daily of publishing more than 30 articles that encouraged the implementation of foreign sanctions on China, which he called “a very crucial part in the conspiracy.”

The news that Apple Daily is closing its doors came alongside the announcement that an editorial writer at the newspaper, Tseung Kwan O, was arrested by police in the region “on suspicion of conspiring to collude with foreign countries or foreign forces to endanger national security.”