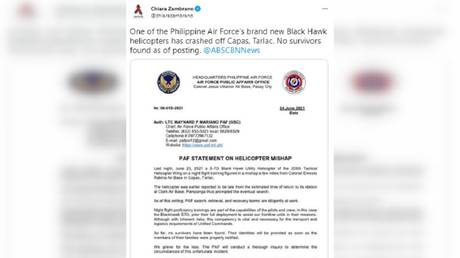 The Philippines has grounded its fleet of S-70i Black Hawk military helicopters following a crash during a training flight on Wednesday evening. No survivors have been found.

He added that contact with the helicopter was lost roughly two hours after takeoff from Clark Air Base at around 8pm local time.

Mariano said that no survivors have been found. The media reported that six crewmembers were killed.

“For the meantime, all the other Black Hawks will not be flown until the conclusion of the investigation,” the Air Force spokesperson said.

The second batch of 16 Black Hawk choppers recently purchased from Poland arrived in the Philippines this month, with the third group expected to be delivered later this year. The order amounts to $241 million.