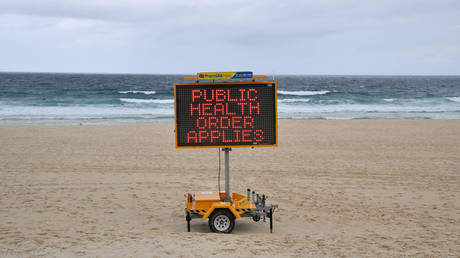 Authorities in Sydney, Australia have slapped the city center and Bondi Beach with a week-long lockdown to curb the rise in infections, as the Delta variant poses a new risk to the country.

The lockdown period of a week in Sydney’s center, inner-city suburbs, and Bondi Beach will come into force after midnight from Saturday onwards to prevent a further spread in Covid cases in Sydney after 17 new cases were reported on Friday, bringing the total number of new cases to 65.

While 65 cases may seem like a small figure, New South Wales Premier Gladys Berejiklian has taken a preventative approach by calling for a lockdown early for suspected hotspots in order to curb infections before the situation spirals out of control and harsher measures are needed. Berejiklian stated that: “We don’t want to see this situation linger for weeks. We would like to see this situation end sooner rather than later.”

The New South Wales premier also took to Twitter to spread the latest developments and advice.

The new lockdown measures include a stay-at-home order for all people in the affected areas of Sydney, who may only leave for essential work or education, medical needs, or to buy food.

However, speculation on the effectiveness of a partial city lockdown has been raised by Omar Khorshid, the president of the Australian Medical Association (AMA), who has argued in favor of a total lockdown of the city.

Before the decision to place Sydney under its first lockdown since December, the New South Wales premier had expressed concern regarding the Delta variant, stating that Sydney was entering its “scariest phase of the pandemic” on Thursday.

It is suspected that the surge in cases came after a limousine driver collected infected passengers from an airport just under two weeks ago. However, on Thursday, the driver rejected claims that he was responsible, pointing to his regular Covid tests and mask wearing.

Australia has managed the pandemic relatively well by implementing long, strict lockdowns. Since the start of the pandemic, only 30,378 infections and 910 coronavirus-related deaths have been reported, and the average number of daily cases stands at around 10.

At present, less than 4.5% of Australia’s population is fully vaccinated.