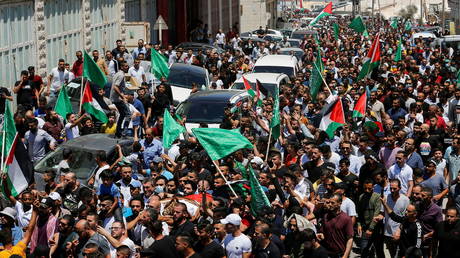 The funeral of a prominent critic of the Palestinian Authority (PA), who died after his arrest in the West Bank on Thursday, has turned into a large-scale protest against President Mahmoud Abbas.

Thousands of people attended the funeral of Nizar Banat in Hebron on Friday, many of whom gathered for a protest after the body of the opposition blogger and politician was laid to rest.

They reportedly marched through the streets chanting slogans, including: “Go away, go away, Abbas” and “The people want to overthrow the regime!” The latter chant gained popularity during the so-called Arab Spring in 2011, which saw longtime leaders deposed in Libya, Egypt and several other countries in the region.

Palestinians chanting “your blood won’t be in vain,” during Nizar Banat’s funeral in occupied Hebron.

Calls for the PA to conduct “a thorough investigation” on itself are futile. There is no enigma in how or why Nizar was assassinated. Abbas must resign. pic.twitter.com/4A9kPvCcMF

Some in the crowd carried Palestinian flags and the green banners of armed group Hamas, which runs Gaza and rivals the PA in the West Bank.

Watch | Thousands of Palestinian mourners in Hebron, south of the occupied West Bank, take part today in the funeral procession of activist Nizar Banat, who was assassinated yesterday by the Palestinian Authority security forces.#NizarBanat #Nizar_Banat pic.twitter.com/CTSWjMX4rC

Several hundred Palestinians also gathered after Friday prayers at the Al-Aqsa Mosque in Jerusalem, chanting anti-Abbas slogans and accusing the PA of being “Israeli spies.” There was a smaller protest in the West Bank city of Ramallah, too.

Hundreds of Palestinians protest the death of Nizar Banat in Al Aqsa yard and chanting for the PA president Abbas to leave. pic.twitter.com/rOvLrmM7Hb

Banat was well known for his videos on social media, in which he accused the Palestinian Authority of corruption and unnecessary close ties with Israel. He had called upon the international community to cut financial aid to the State of Palestine over its suppression of free speech, violations of human rights and authoritarian rule. The 44-year-old was planning to run in this year’s Palestinian election, which Abbas postponed in April amid divisions in his own party and a dispute over voting in East Jerusalem.


Palestinian security officials detained Banat at his home in southern Hebron on Thursday, with his relatives later saying the activist was viciously beaten before he was taken away. His death was reported a few hours later. An autopsy indicated he suffered an “unnatural death.”