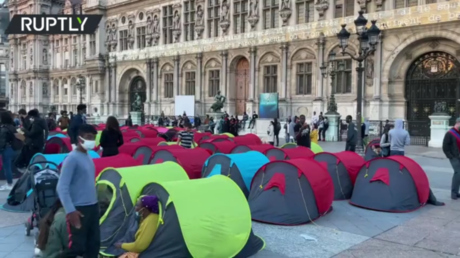 Hundreds of migrants and activists have installed a makeshift camp outside the mayor’s office in Paris, demanding that asylum seekers have a stable roof over their heads.
According to Le Parisien newspaper, more than 250 tents were set up outside the iconic Hotel de Ville, the seat of the city’s government, on Thursday evening. Most of the people in the makeshift camp were said to have come from sub-Saharan Africa.

Charity Utopia 56, which helps migrants and which organized the event, said that around 300 single women and families, including dozens of small children, were residing in the camp. The group said that over the past two weeks they had run out of shelters for migrants.

“Every day we provide tents to dozens of homeless families that sleep under bridges on the outskirts of Paris,” Utopia 56 said in a statement on its website. “The prefecture ignores our alerts. The City Hall, through Paris Deputy Mayor Ian Brossat, who is in charge of housing, points to the responsibility of the State.”

The French media cited a letter by Brossat to regional officials, in which he warned about the increasing reports of homeless asylum seekers in Paris. “In order not to allow this situation to continue… we ask for a decision to be made as soon as possible,” he wrote.

A woman at the camp told RT’s Ruptly video agency that she used the municipal-run emergency shelter hotline several times after she became pregnant, but was unable to find a stable place. “On Friday I was left outside again, and they asked me to come here. I’m tired – that’s the reason I came today.”

Activist Reza Jafari said than more than 350 people need a home, while the charity can only accommodate between 50 and 80 people. “We have informed the mayor, the regional administrative services and the prefectures about the situation but, unfortunately, there hasn’t been a response.”

Activists previously set up around 400 tents at Place de la Republique in Paris in March to draw attention to the matter.