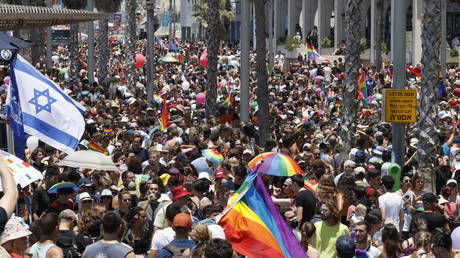 A man accused of plotting an attack on Tel Aviv’s annual Gay Pride parade was detained by Israeli authorities before he could carry out his plan, while several other individuals were arrested for trying to disrupt the festival.

Israel police announced that they had detained a Tel Aviv resident in his 30s, who was intercepted as he was traveling to Friday’s parade. The suspect was armed with a number of weapons, including a taser, nunchucks, and steel chains. It appears that he was being tracked by police ahead of the event, although it is unclear why he was initially flagged as a potential security threat.

A hearing will be held to extend the suspect’s detention, the Jerusalem Post reported.

Participants attend the first Tel Aviv pride event since before the Covid-19 pandemic on June 25, 2021

Police also detained a couple who reportedly tried to force their way past security barricades. The pair allegedly aired their opposition to the LGBTQ event before trying to gain entry to the parade grounds – assaulting several police officers in the process. They were subsequently arrested and brought in for questioning.

Friday’s parade was attended by thousands of people, marking one of the largest public gatherings held in the city since the start of the Covid-19 crisis. Although strongly condemned by religious conservatives, homosexuality is not as controversial in the Jewish state as it is elsewhere in the Middle East. Gay people serve openly in Israel’s military and parliament.


Around a quarter of a million people attended Tel Aviv’s Pride parade in 2019. The event was called off last year due to the coronavirus pandemic.

A smaller LGBTQ march was held in Jerusalem earlier this month, with a heavy police presence to ensure security. In 2015, an ultra-Orthodox Jew stabbed a 16-year-old girl to death at a Jerusalem Pride event.

Israel isn’t the only country to struggle with safety during Pride Month festivities. Last week, a truck hit and killed two people at a Pride parade in Florida. Although local officials initially described the incident as a “terrorist attack” against the LGBTQ community, police later determined that it was actually a “tragic accident.”