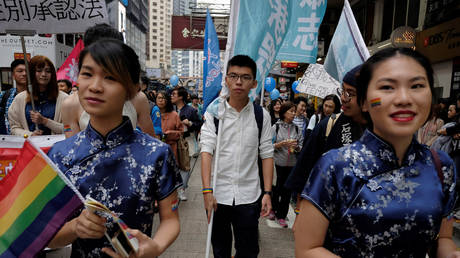 Hong Kong’s High Court ruled on Friday that housing policies “constitute unlawful discrimination” by not acknowledging same-sex partners as a tenant’s family member, marking a landmark victory for LGBT rights in the region.

In its judgement, the High Court stated that current housing policies violate the region’s Basic Law constitution and Bill of Rights by denying joint occupancy and ownership rights to same-sex couples.

The ruling claimed that the subsidized housing policy is “oppressively unfair” and “constituted unlawful discrimination on the basis of sexual orientation,” ordering the authority to rectify the system.

The case had been brought by same-sex couple Henry Li and his now-deceased partner Edgar Ng against the regional government, marking their second victory for LGBT rights in Hong Kong. The duo had purchased a government-subsidized flat in 2018 but were prevented from filing for joint ownership under the housing policy, as the system only recognized nine categories of relationships, including heterosexual couples, such as a husband and wife.

Celebrating the ruling, Li called it a “bittersweet” moment, urging authorities to “timely, proactive actions to protect fundamental rights,” so other couples do not have to suffer the legal or emotional challenges of discriminatory policies.

Previously, Li and Ng secured a win in a 2020 court ruling that declared same-sex couples have equal rights to inheritance as their heterosexual counterparts. While Hong Kong does not recognize same-sex couples, the court system allows LGBT individuals to challenge existing policies that they believe discriminate against them.

In response to the Friday ruling, the Hong Kong housing authority said it will “take appropriate action after studying the judgement in detail and seeking legal advice.”