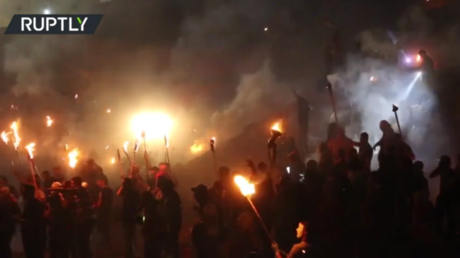 Palestinians have marched with torches and used laser pointers to protest a newly-erected settler outpost in the West Bank on Thursday. Several protesters were reportedly hit by rubber bullets.

Palestinians have launched a ‘night disruption’ campaign to protest the installment of Givat Eviatar, a new Israeli Jewish settler outpost near the village of Beita in the Nablus region.

Protesters marched in a torch-lit procession on Mount Sabih, as well as burned tires and flashed lasers at settlers’ homes.

The IDF released a statement to the Israeli media, saying its troops were deployed on site to protect Israeli civilians against a “large number of violent rioters.”

The Palestinian WAFA news agency reported that three Palestinians were wounded by rubber bullets and dozens were hit by tear gas. In a separate report, the agency said that the IDF detained 11 Palestinians, including three from Nablus.

Also on rt.com
German government to ban displaying of Hamas flag, after spike in anti-Semitic incidents during Gaza conflict – media

Israeli settlements in the West Banks are illegal under international law because the UN sees them as an obstacle to the creation of an independent Palestinian state.

The settlers arrived in the Beita area in early May. The IDF ordered them to vacate the land by June 6, but the order has since been postponed, according to Reuters.

On Thursday, UN Middle East peace envoy Tor Wennesland condemned the settlement expansion in the West Bank. “The advancement of all settlement activity must cease immediately,” he said.