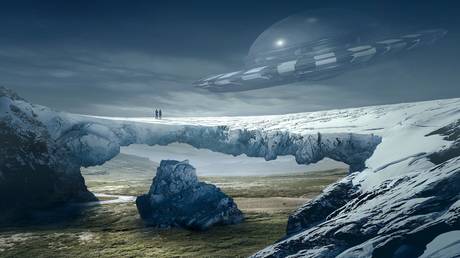 One of the founders of a new group formed last month, the International Coalition of Extraterrestrial Research, explains its mission to RT.com – and why he’s convinced aliens frequently visit Earth.

Aliens have under-ocean bases and are trying to dissuade the human race away from nuclear weapons, due to the potential catastrophic damage.

In some quarters, that statement would see you dismissed as a crank.

But not for Gary Heseltine, vice president of the newly formed International Coalition of Extraterrestrial Research (ICER).

They are a non-governmental organisation headquartered in Portugal comprising scientists, researchers, and academics from 27 nations. Their mission statement is: Preparing for Contact.

Every member of ICER has signed an oath underlining their core belief.

Heseltine explains: “It says after 70 years of worldwide research, we think the evidence points to something that is real, acts with intelligence and is likely to be extraterrestrial, and non-human.”

Read more
The aliens are coming: Here’s what the movies tell us we should expect from the Pentagon’s UFO report

It sounds like a plot from a Hollywood movie, but the group is serious, and keen to discuss its theories rationally and evidentially.

Heseltine, a former British police detective, explained: “My remit and ICER’s remit is what would stand up in a hypothetical court of law.

“We should be preparing now for the possibility this is real, as the evidence says it’s real. We are dealing with something that’s gone beyond lights in the sky.

“To put it in perspective, in three percent of cases worldwide there’s something that is a genuine phenomenon, that defies explanation after investigation. Three percent of millions of cases over the last 70 years is a lot.”

Some experts report these crafts flying at hypersonic speeds, pulling a g-force of 600, with no wings or propulsion system. (As a comparison, an F-16 can only fly at half that speed and pull 9G).

Heseltine talks of observables with UFO or UAP (Unidentified Aerial Phenomena) that include instant acceleration, instant stop, instant reversal on the same track, all with no deceleration, and right-angle turns with no declaration at the point of turn.

Others are truly hard to wrap one’s mind around: ICER says these crafts can switch from being invisible to visible in the click of a finger. And all emit no noise.

Experts agree this is all beyond military capabilities – even secret, advanced programs. “This is why ICER is pushing for governments to release information to be studied,” Heseltine says. “The performance is simply things we can’t do.

“ICER wants the scientific data released from these incidents; telemetry, radar, performance characteristics, as the more scrutiny of the actual data, the more ICER believes that it will quickly prove to be something that is not man-made.”

Also on rt.com
Aliens like our NUKES, former intel official admits, claiming that UFOs ‘interfered’ with US atomic capabilities

Sightings and speculation around UFOs began in earnest in the 1940s. ICER believes this is not by chance, as it was when the first nuclear weapon was detonated.

“What a coincidence,” Hesletine opines. “I think when we detonated our first atomic weapons, it sent an invisible shockwave out into space that was picked up by other civilisations who then realised that this creature on this planet had reached a level of technical achievement that it was able to split the atom.”

Continuing the theory, Heseltine explains how the 509th Operations Group of the US Air Force was the first squadron to have nuclear weapons. It was their pilots who dropped the Hiroshima and Nagasaki bombs.

Walker Air Force Base, which is near Roswell in New Mexico and where the infamous alien crash incident allegedly occurred in 1947.

Since then, according to Heseltine, other nuclear incidents have occurred, such as a Soviet Union missile silo being turned on in 1982 seemingly by itself and US silos being inexplicably turned off.

This combines with ICER’s feelings that aliens have been creating bases in the deep trenches of our oceans.

Heseltine asks: “Wouldn’t it then make sense that they would not want to see the Earth destroyed in a mutually assured destruction war that would render the planet toxic?

“It would make sense for them to come out and say ‘we don’t think you should be playing with nuclear weapons.’

“We can’t prove all that; the Roswell incident you can prove circumstantially, but in terms of can we produce the definitive alien body? No. Can we give you the definitive piece or part of the crash? No.”

That again chimes with ICER’s agenda, as they estimate 90 percent of UFO information is locked away by governments.

“We’re calling for transparency,” demands Heseltine. “In the end, you’re not going to get 70 years of secret government special access programs the Americans have been involved in. They’re not going to volunteer all that.

“But now at least recognise these things are flying around, we don’t know what they are, they can come and go with impunity, and let’s now throw everything on a global basis for a common aim.”

There is one case where ICER feels there is credibility that secret programs exist.

Gary McKinnon was a Scottish hacker who broke into the US military computer system.

America tried to extradite him, but the then-prime minister, Theresa May, prevented it.

In an BBC interview, McKinnon discussed how he was looking for UFO-related information and saw a picture of a craft: “This thing was hanging in space, the Earth’s hemisphere visible below it, and no rivets, no seams, none of the stuff associated with normal man-made manufacturing.”

Heseltine thinks the McKinnon case is revealing, adding: “You could argue they are just doing their job as he broke the law, or did they really want to protect some of the things he said he saw and spoke about?

“If it went to trial, a lot of top UFO scientists and researchers would have helped him, and it would have opened up in a public court this wider issue of UFOs, and at that time the Americans certainly didn’t want to talk about [it].

“Right now, there is no corroboration as it’s one man’s account and he can’t produce the evidence of what he said he saw.”

Also on rt.com
Chinese military has its own UFO task force… and it’s been ‘overwhelmed’ by surge in sighting reports – media

Another telltale sign for Heseltine is the British government’s closure of its UFO desk in 2009.

He explains: “The design of that was to make the collection and collation of material in the UK nigh on impossible and it worked. You cannot get any accurate figures for how many cases are seen in the UK.”

ICER wants all that to stop, for everything to be documented, and for the notion of aliens to be introduced into the mainstream. They are in the process of building a body of work they hope will gain them special consultative status at the United Nations.

Heseltine urges: “Let’s have an adult discussion, sit round the table and talk about this from a one world approach. This is not an American, Russian, or Chinese problem, it’s a world issue and we should look at it as one global race, the human race.

Read more
Long-awaited UFO report mentions no aliens, but asks for more money for US spies

“And if it turns out that we’re just ants in the playground and we’re very primitive, which I suspect we are, then why should ET talk to an ant? When we go to the playground and look down, we don’t talk to ants, do we? We think we’re sophisticated and they can’t understand us. What if we’re the ants in this global network of civilisations?”

But then that begs the question: if we are of a lesser intelligence then why bother to try to connect with us?

Heseltine’s theory is that Earth is a great place for a holiday if you’re an alien. “We send probes out into the solar system and beyond, we’re only doing what they’ve done, but they’ve done it quicker as they are millions of years ahead of us.

“People ask me, why do they come here? I don’t know why they come here, but my pet theory is this planet in this part of the cosmic neighbourhood is a bit like an oasis in the desert because it’s so full of water, rich in diverse life, I think we’re a bit like the Great Barrier Reef.

“We go to places that are interesting, so if you were a space tourist, why wouldn’t you come to Planet Earth and just observe the minions?”

ICER had eagerly anticipated the US government’s Advanced Aerospace Threat Identification Program (AATIP) report, which was billed as opening up the American archives and revealing all of what’s been kept secret since Roswell.

The nine-page document was issued by the Office of the Director of National Intelligence on Friday, stating that between 2004 and 2021 there have been 144 cases of flying objects, but only one can be explained. That was judged to be a large, deflating balloon.

In the remaining cases, the American authorities stated they “lack sufficient information in our dataset to attribute incidents to specific explanations.” And while, according to a senior US official, there were “no clear indications that there is any non-terrestrial explanation,” they didn’t specifically rule out the possibility.

Also on rt.com
US government considers at least some UFOs to be ‘EXTRATERRESTRIAL’ & ‘EXTRADIMENSIONAL’, ex-intel official says

Heseltine was involved in drafting ICER’s official response to the report, which described the US government communication around these matters as a “sea change” and “long overdue.”

The statement went on to say: “ICER encourages that all relevant parties work together for the greater good of establishing the truth about these craft. ICER is confident that the more scientific research is undertaken, the data will ultimately confirm that Planet Earth is being engaged by extraterrestrial/non-human intelligences.”

Heseltine feels the report will create an unstoppable momentum that started with a New York Times article in 2017 showing video footage of crafts that had no resemblance to anything we know about.

We could be reaching the point where UFOs and aliens are no longer science fiction.

Heseltine contends: “The pressure is building, that dam will eventually shatter and collapse. We’re not there yet, but I think in six months to a year’s time, if the momentum gets building, then the dam will quickly break.

“That’s when we’re into what we call Big Disclosure; you’ll know when it happens as it’ll be 24/7 on every news channel like Covid.

“There will be implications psychologically for mankind to get their head around and some people will have a difficult time.

“Some will think we’re going to be invaded like Independence Day. In reality there could be a lot of positives. What if they said, ‘we have a cure for cancer?’ What if we didn’t have to use fossil fuels – they might have an anti-gravity machine and that would help the climate and planet?

“Everybody, whether it’s scientists, academics, the man and woman on the street, everyone will say it’s the most profound moment in human history.”