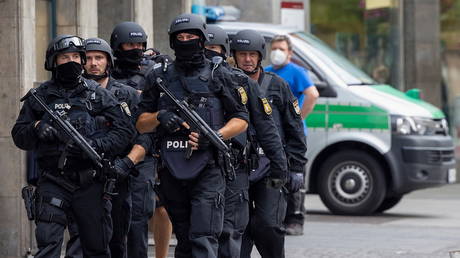 The knifeman who killed three people and injured six more in Wuerzburg, Germany may have been motivated by jihad. According to the Bild tabloid, the Somali attacker had read ISIS propaganda before his rampage.

Police in Wuerzburg, Bavaria shot and arrested a 24-year-old Somali man on Friday after he stabbed three people to death and injured six others, two seriously. The killer reportedly took a knife from a department store and immediately began attacking those around him, and according to witnesses he shouted “Allahu Akbar” during his stabbing spree.

Bild reported on Saturday that, although he was not known to authorities as an extremist, the attacker had made stabbing threats back in January, and police had gotten involved. Bild also reported that a search of the homeless shelter in which he was living revealed Islamic State (IS, formerly ISIS) propaganda in a garbage can, apparently discarded by the suspect before his attack.

After the incident, the 24-year-old apparently said that he had achieved his “jihad,” per an official note reportedly seen by Bild.

Officials have not yet ascribed a motive to the attack. Bavarian Interior Minister Joachim Herrmann told reporters on Friday that the knifeman was mentally ill, and had previously been “forcibly committed to psychiatric treatment.”

Should the attack be ruled an Islamist one, it would be the second such incident in Wuerzburg in five years. Back in 2016, an Afghan asylum seeker stabbed and injured four people with a knife and a hatchet on a train near the Bavarian city. Police shot the attacker dead, and investigators later discovered that he had been in contact with members of IS, and told them that he expected to become a “martyr.”