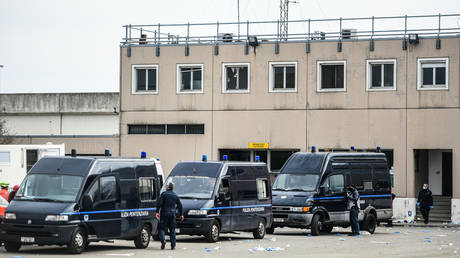 Over 50 warders have been targeted by Italy’s judiciary, with more than 20 in detention or under house arrest, amid a probe into a major prison riot. Warders’ unions branded the measures “disproportionate” and “incomprehensible.”

The pre-trial measures were implemented on Monday, affecting prison warders who are under investigation by an Italian judge, following a request from the public prosecutor in Santa Maria Capua Vetere, a town north of Naples.

The warders targeted include prison police officers and administrative workers alike, with eight arrested and 18 others put under house arrest. Others still were targeted by different measures, including restrictions on their movements and suspensions from jobs.

The pre-trial restrictions were ordered amid a probe into a prison riot which broke out in a Santa Maria Capua Vetere jail on April 6, 2020. The riot erupted amid a wave of prison unrest that swept across Italy during its first coronavirus lockdown. Multiple riots broke out in Italian detention facilities, as inmates were dissatisfied with anti-Covid measures – or the lack of them – introduced by Italy as it became the first European country hard-hit by the virus.

The crackdown in Santa Maria Capua Vetere is believed to have been particularly violent, described by a judge in a preliminary investigation as a “horrible massacre” with the inmates allegedly beaten with batons, strip-searched, forced to kneel and put into solitary confinement en-masse. Some 41 of the warders now under investigation face various charges, including aggravated torture, aggravated personal injury and aggravated mistreatment. The crackdown is said to have affected nearly 300 inmates in the prison.

According to prosecutors, the quelling of the riot had been actively discussed by the officers in group chats, with them allegedly referring to the inmates as “cattle” and threatening to “slaughter them like calves.” After suppressing the riot, the officers allegedly bragged about giving the prisoners “four hours of hell” when no one got “saved.”

The judiciary’s action against the warders has drawn sharp criticism from the major trade unions SPP and USPP, who called it “disproportionate” and “incomprehensible,” and pointed out the crackdown did not come out of nowhere and the prisoners had actually been rioting with a real threat of escape.

“It seems to us a disproportionate measure compared to the facts in question,” Aldo Di Giacomo, general secretary of the SPP union has said, expressing doubts that all the 52 accused had somehow conspired to get violent.

“The facts must be contextualized to the historical phase which coincided with one of the darkest pandemic emergencies in the history of Italian prisons… We are on the side of our colleagues, certainly not out of some corporate spirit, but due to the commitment shown to restore order in the prison.”

Meanwhile, Italian inmate rights group Antigone has cheered the judiciary’s move, stating the violent crackdown must be investigated in full.