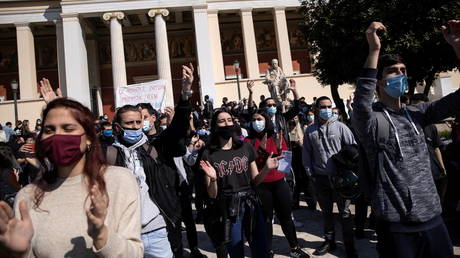 Greek prime minister Kyriakos Mitsotakis has unveiled a ‘freedom pass’ that will give 18-to-25-year-olds who get a Covid jab €150 ($179) to spend on travel and entertainment, an attempt to ramp up the country’s inoculation drive.

Speaking to ministers at a cabinet meeting on Monday, the Greek premier announced the proposal as a “gift of gratitude” to young people who’ve shown “patience and perseverance” during the Covid pandemic.

The so-called ‘freedom pass’ will be available to anyone aged 18-25 who has had at least one dose of a Covid vaccine, giving recipients €150 to spend on travel and entertainment, including plane tickets, hotel stays, music, theater and cinema trips, and visits to cultural sites.

The cash incentive will be available by the end of July, as well as an offer of one month free internet data for their mobile phones throughout the month of August.

The government felt the initiative was needed to provide an incentive for young people to get protected against the virus, ensuring they are shielded and less likely to transmit the virus, and limiting the impact of new strains on the country’s health service.

Citing the effects of the more transmissible Delta variant on other countries, the Greek government stressed the importance of ensuring its vaccination program was swift and covered as many adults as possible before Greece is hit by the strain.

The country is seeking to ensure it can reopen for the summer holiday season, having been pushed into a second lockdown back in November, as cases threatened to overwhelm the nation’s health system. However, so far, only around 33% of Greece’s 11 million-strong population is fully inoculated against Covid.