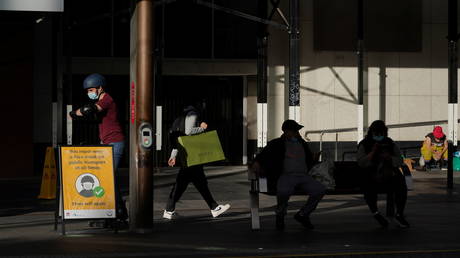 Four major Australian cities imposed strict restrictions on Tuesday, amid an outbreak of infections linked to the Delta strain of Covid-19, putting 10 million residents into lockdown in Brisbane, Darwin, Perth, and Sydney.

Perth began a four-day snap lockdown from midnight on Tuesday, while Brisbane will start a three-day stay-at-home order from Tuesday evening, joining Darwin and Sydney, which have already imposed the measures over a rise in infections.

Queensland’s state premier, Annastacia Palaszczuk, stated that the restrictions in major cities were needed because “overseas arrivals” had brought the virus into the country. Admitting that imposing the lockdown was “tough,” the regional official cited concern about fresh outbreaks in the country, with 23 new cases reported in the past 24 hours.

Australia has managed to contain the virus domestically throughout the pandemic via strict measures, including border closures, hotel quarantines, and snap lockdowns, but its slow vaccine rollout has made it susceptible to new strains that are imported into the country.

The nation of 25 million has administered 7.5 million vaccine doses as of June 28, but less than 5% of adults are thought to have been fully inoculated against the virus.

Amid concern about the spread throughout Australia of the Delta variant first detected in India, New Zealand restricted its ‘travel bubble’ with the country. From July 5, the New Zealand government has said it will begin to reopen the corridor, but only for regions that have not reported any new cases.

The lockdowns across Australia come after the country’s prime minister, Scott Morrison, announced that his government would make it mandatory for care and quarantine hotel workers to have a Covid-19 jab, as well as offering under-60s who sign an indemnity form the option of having the AstraZeneca vaccine. A new ‘no-fault’ scheme indemnifies a doctor from being sued if a patient has an adverse reaction to the jab, and anyone who does is entitled to compensation instead from the federal government.