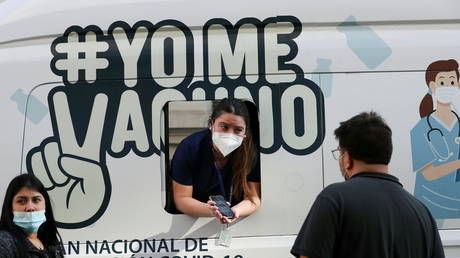 The Chinese foreign ministry has taken aim at the New York Times after it claimed that countries that were most reliant on Chinese Covid-19 vaccines were among the most affected by the virus in recent times.

Citing the head of the Chilean health department, Wang claimed that the NYT report does not reflect the facts. “It is regrettable. The outside world claimed that the CoronaVac shot was ineffective without any scientific basis.”

He stated that if the NYT conclusion about the Chinese vaccines were true, then surely there would be “disastrous” consequences in China where all the vaccines administered are indigenously developed.

Wang added that “wise netizens have correctly noted that the slander of China’s vaccine is out of prejudice against Beijing.” The spokesman called on the US media to stop spreading misinformation about vaccines and instead to promote the availability of affordable vaccines in developing countries.

In April, Chile said that data proved the CoronaVac jab to be 67% effective in preventing symptomatic infections of Covid-19. The vast majority of the country’s shots come from the Chinese firm Sinovac Biotech.

Last week, the NYT stated that in the Seychelles, Chile, Bahrain and Mongolia, where high levels of immunization had been achieved primarily using Chinese vaccines, there were concerning fresh outbreaks.

According to their own data, all four countries ranked in the top 10 nations with the worst Covid outbreaks as recently as last week. Data show that Bahrain experienced a severe outbreak which peaked in May; the other three countries are currently trying to overcome record highs for national daily Covid infections.

On Sunday it was also reported that at least 10 of 26 Indonesian doctors who died from Covid-19 in June had received both doses of the Sinovac vaccine.

China’s Sinopharm and Sinovac shots have both been approved by the World Health Organization.