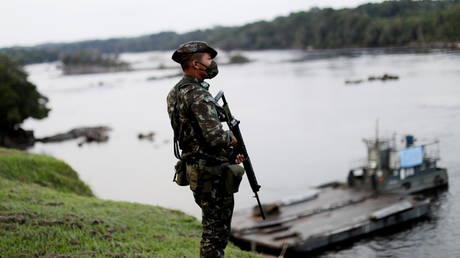 Brazil’s President Jair Bolsonaro has ordered his country’s military to return to the Amazon in a bid to combat a surge in illegal deforestation, but his critics have claimed the directive is too little too late.

The presidential decree said that troops would be sent to the states of Para, Amazonas, Mato Grosso and Rondonia, and that their deployment would last until the end of August. The order did not specify the number of soldiers involved, nor the cost of the operation.

Vice President Hamilton Mourao signaled earlier this month that the mission could be extended.

The order marks the third time that Bolsonaro’s government has sent troops to protect the Amazon. Thousands of soldiers had previously been dispatched as part of “Operation Green Brazil,” the most recent deployment ending in April.

The rainforest has suffered from a sharp uptick in deforestation over the past several years. In 2020, illegal logging and other destructive activities reached a level unseen in more than a decade. In May, there was a 67% spike in deforestation when compared to the same month a year before that, according to official data.

Critics have repeatedly accused Bolsonaro of not doing enough to protect the Amazon. According to the MapBiomas Project, a network of environmental researchers, 98.9% of deforestation is carried out illegally, but the Brazilian government has issued fines in just 5% of these cases.

Marcio Astrini, executive secretary of the Climate Observatory, an alliance of environment-focused nonprofits, said that Bolsonaro’s most recent troop deployment serves only as a “smokescreen” that will allow his government to claim to be taking a tougher stance on deforestation.

He further accused Bolsonaro of implementing policies that have “destroyed” the state’s ability to monitor illegal deforestation operations, adding that regulators have even stopped destroying machinery used for illegal logging.

The Brazilian government has recently come under pressure from US president Joe Biden to step up its efforts to preserve the rainforest. Bolsonaro has complained of a lack of resources necessary to tackle the issue on his own, and has asked for outside help.

The troop deployment comes less than a week after Brazil’s Environment Minister Ricardo Salles announced his resignation in response to an ongoing probe into his alleged involvement in illegal logging operations. He has denied any wrongdoing.