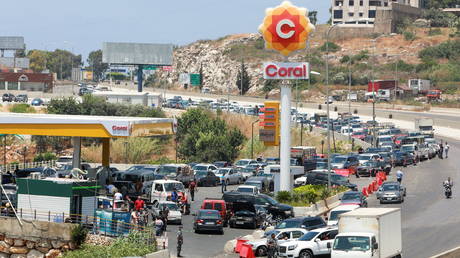 A sharp increase in fuel prices is expected to exacerbate Lebanon’s internal woes, with the country already reeling from months of economic and political instability.

Lebanon’s Energy Ministry announced on Tuesday that it would raise gasoline prices by 35%, a decision that will likely cause a sharp increase in the cost of most commodities. The price of diesel saw an even larger increase of 38%.

Motorbike drivers wait to get fuel at a gas station in Beirut, Lebanon June 29, 2021.

Over recent weeks, massive queues for petrol have reportedly led to fistfights and even shootings among frustrated motorists. Angry citizens across the country have erected barricades in the streets, motivated in part by the fuel shortages.

A Lebanese man gestures in front of burning tires during a protest at a main road in Lebanon’s capital Beirut against dire living conditions amidst the ongoing economical and political crisis on June 28, 2021.

The situation is so dire that planned power outages have become daily occurrences, and even private generators are regularly shut off in order to conserve fuel. Last week, the Lebanese government raised the price of subsidized bread by 18% – marking the fifth time in the past year that the basic staple saw its price go up.

On Monday, dozens of demonstrators laid siege to the Lebanese Swiss Bank in Beirut, demanding access to cash reserves in order to alleviate dire living conditions. Three staff members of the bank were reportedly attacked during the incident. The protesters, led by the Banin Charity Association, a self-described NGO, accused the bank of stealing money from the Lebanese people. Police were called to the scene to remove demonstrators from the building and unblock the surrounding roads.

Motorbike and car drivers wait to get fuel at a gas station in Beirut, Lebanon June 29, 2021.

Lebanon is facing an unprecedented economic catastrophe that has been worsened by months of political deadlock. The World Bank recently said the crisis is among the worst the world has seen in more than a century. The seemingly insurmountable political and economic problems were made worse by a devastating explosion in the Port of Beirut last August, which caused extensive damage to a large portion of the city.