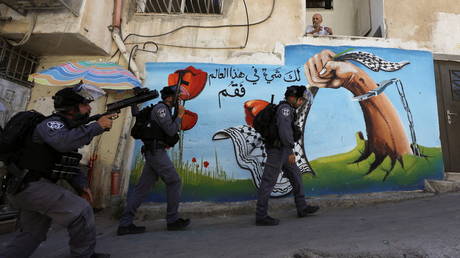 Israeli security forces have used rubber bullets and tear gas against Palestinians, who were trying to stop the demolition of an Arab-owned shop in the East Jerusalem neighborhood of Silwan on Tuesday.

A bulldozer, escorted by police and border guards, arrived outside the Harbi Rajabi’s butcher shop two days after the expiration of the Israeli municipality’s deadline for more than a dozen Palestinian families to demolish their own homes.

The municipality, which wants to develop a park in the area, says the houses were built illegally. But the Palestinians claim that they had no other choice as getting an Israeli construction permit has been made almost impossible for them. They insist that it’s part of a deliberate policy by the Israeli authorities, aimed at driving them out of Jerusalem, which is claimed as their capital by both Jews and Palestinians.

The protesters, including the owner of the shop and his relatives, confronted the security forces, but were met with rubber bullets and tear gas.

The clashes saw 13 Palestinians injured, according to the Palestinian Red Crescent. The police said that two of its officers were also hurt by stones that were thrown at them.

Three people were arrested for disorderly conduct and assault following the scuffles. The owner of the shop and his son were among those detained, Palestinian WAFA news agency said.

Also on rt.com
With growing international pro-Palestinian support, illegal settlers may drag Israel into a war it cannot handle

The butcher shop was eventually knocked, with its demolition reportedly facilitating access to the rest of Silwan’s illegally built homes.

One of the Palestinians, who used to work at the shop, told Reuters that the livelihood of 14 family members depended on it. “We have no other way to support our families,” he said, adding that he would now be forced to look for a new job from scratch.

A Palestinian man uses his mobile phone as he stands near the debris of a shop that Israel demolished in the Palestinian neighbourhood of Silwan in East Jerusalem. © Reuters / Ammar Awad


A plan to evict Arab families from another East Jerusalem neighborhood, Sheikh Jarrah, was among the causes of the most serious flare-up in years between Israel and Palestinian armed group, Hamas, in May.

According to the UN, the 11-day exchange of fire between the two sides resulted in the death of more than 250 people in Gaza, including 66 children. In Israel, 12 people, including two children, were killed by rockets coming from Gaza.