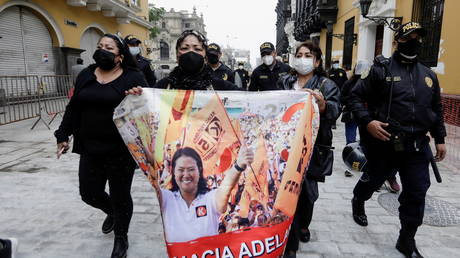 As Keiko Fujimori’s chances of flipping an election loss fade, she demanded a foreign ‘audit’ of the results she has challenged. Last week, she was implicated in an alleged attempt to bribe a jury reviewing her fraud complaints.

The right-wing candidate is struggling to legally overturn the outcome of the June 6 presidential election. The final count put her behind leftist contender Pedro Castillo by just over 44,000 votes, but she sought to annul some 220,000 ballots based on claims of irregularities.

On Monday, she sent a letter to acting president Francisco Sagasti, urging him to ask “international organizations” to conduct an audit of the vote, stating that it was the only way for Peruvians to “know the truth.” She said that, without an external checkup, the legitimacy of the next president would forever be in question and that it was Sagasti’s “historic mission” to deliver one.

Fujimori didn’t say which international organizations she believes should lend legitimacy to the election. The Organization of American States (OAS) called it free and fair, as did many governments, with the US State Department even describing it as a “model of democracy.”

The petition seems to demonstrate Fujimori’s expectation that the National Jury of Elections (JNE), a special four-person judicial body that reviews election complaints, would not take her side. On Monday, the JNE rejected 10 claims by her Popular Force party, bringing the confirmation of Castillo’s win closer. More hearings are expected this week.

Reminding of the findings of the OAS elections observation mission in Peru. Pedro Castillo was the choice of the majority. The people must be respected. https://t.co/XQ988AnK4s

The JNE resumed work after replacing one of its members last week. Judge Luis Arce stepped down on Wednesday, saying he refused to carry out the duty after being suspended for alleged pro-Fujimori bias and conflict of interest. His replacement was sworn in on Saturday.

Earlier, Arce’s name came up in leaked tapes allegedly exposing a plot to bribe three members of the JNE so that they would rule in Fujimori’s favor. The plot was attributed to Vladimiro Montesinos, the former powerful intelligence chief under ex-president Alberto Fujimori, the father of the embattled candidate.

In the tapes that were released on Tuesday, Montesinos seemed to instruct a contact in the military about who he should contact to influence the JNE. In another one, a politician claimed that Arce asked for $3 million for each judge willing to vote in support of Fujimori’s claims. The authenticity of the tapes and the possible crimes they indicate are now being investigated by the Peruvian Prosecutor General’s office at the JNE’s request.

The bribery plot scandal was particularly explosive due to the fact that Montesinos is currently serving a 25-year prison term for crimes he committed while in office. He is in custody at a naval base. It was reminiscent of a 2000 outcry over a video, in which he was shown bribing an opposition congressman to support the party of his boss. It was one of the final blows before the downfall of Alberto Fujimori. He is likewise serving a sentence over corruption and abuse of human rights during his presidency.

Keiko Fujimori herself is facing corruption allegations and spent about 13 months behind bars in pre-trial detention between 2018 and 2020, before being released on parole.

Her refusal to concede to Castillo has further fuelled Peru’s political division. Supporters of the two candidates regularly hold mass protests in their support, but so far have managed to avoid major violence. Fujimori has the backing of urban elites and the conservatives, while Castillo, a teacher and union organizer, has won the hearts of poor rural residents.

Castillo was decried by Fujimori as a communist who would ruin Peru’s fragile economy with expropriation of property and other similar policies. His actions after scoring the majority vote, however, somewhat alleviated such fears. He appointed several moderate economic advisers and last week announced he would ask Julio Velarde, a respected chair of the Central Reserve Bank of Peru, to retain his position under his presidency.

The support for Fujimori, meanwhile, seems to have dwindled, as evidenced by an editorial printed at the weekend by the influential conservative newspaper El Comercio, which harshly criticized her attempts to stall the certification of election results.