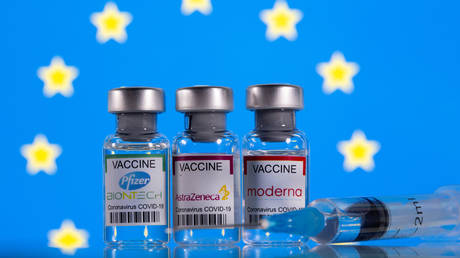 New data shows that full vaccination with any of the four Covid-19 jabs approved for use in the EU offers protection against Delta and other variants of the virus circulating in Europe, the bloc’s drug regulator has said.

The first real-world data for the jabs shows that antibodies triggered by vaccination can neutralize the Delta variant, the European Medicines Agency (EMA) announced on Thursday.

The Delta variant is more transmissible than earlier forms of the coronavirus, due to certain spike protein mutations in the strain.

The EMA has so far approved the Covid vaccines made by Pfizer-BioNTech, Moderna, Oxford-AstraZeneca, and Johnson & Johnson.

It is also conducting rolling reviews of the Sputnik V, CureVac, Novavax, and Sinopharm jabs.

The regulator said it has asked all vaccine developers to investigate if their jab provides protection against emerging new variants of the virus.

Also on rt.com
WHO Europe leader warns of new wave as Covid cases creep up after 10-week decline across continent

Although this strategy is not yet regulated in the EU, preliminary studies from Spain, Germany, and the UK showed a “satisfactory” immune response and raised no safety concerns, he added.

Cavaleri also said the EMA’s safety committee is still assessing a small number of cases of heart and chest conditions, namely myocarditis and pericarditis, which were first reported in people following vaccination in April.

There is not currently enough data to establish a causal relationship between the conditions and Covid inoculations, Cavaleri said, adding that a few people were hospitalized but have since recovered.