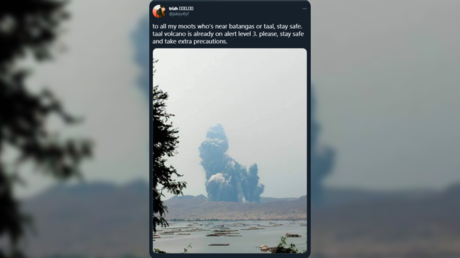 The Philippines’ volcanology and seismology agency has raised its warning level for volcanic activity from level two to level three, after the Taal volcano spewed a plume a kilometer into the air.

In a statement shared on Facebook on Thursday, the Philippine Institute of Volcanology and Seismology said, “The Taal volcano main crater generated a short-lived dark phreatomagmatic plume one kilometer high with no accompanying volcanic earthquake,” at 3.16pm local time. A  phreatomagmatic eruption occurs when magma – that is, molten rock underground – meets water. Taal is located in a volcanic crater lake of the same name on the island of Luzon.

Small eruptions can be seen in photos and videos shared online.

To the people who are near taal or in batangas area pls stay safe taal volcano is releasing a huge amount of smoke right now so please pray for us and other batangeuños and people that will be affected pic.twitter.com/PWJFDZpGlY

to all my moots who’s near batangas or taal, stay safe. taal volcano is already on alert level 3. please, stay safe and take extra precautions. pic.twitter.com/I3crl9cIPx

The agency said it was raising the alert level to three, termed “magmatic unrest,” because of the plume and “the magmatic intrusion at the main crater,” which may generate further eruptions.

It strongly recommended that Taal Volcano Island and the high-risk districts of Agoncillo, Laurel, and Batangas should be evacuated, given their proximity and the possibility of what are known as pyroclastic density currents – that is, hot, ground-hugging flows of ash and debris that move at speeds of hundreds of meters per second and travel many tens to hundreds of kilometers from the source – and even a tsunami.

It reminded people that Taal Volcano Island is a permanent danger zone and advised citizens to keep an eye out for any lake water disturbance.

In January 2020, the volcano fired clouds of ash into the sky, causing panic and the evacuation of more than 100,000 people.