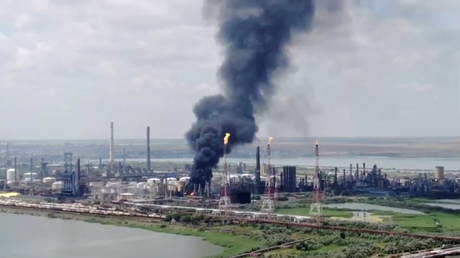 An explosion at a Petromidia’s Black Sea crude oil refinery in Romania has sent plumes of black smoke rising into the sky. Several people are injured, and ambulances have arrived at the scene, according to reports.

A government official, Silviu Cosa, told local TV station Digi24 on Friday that an explosion had occurred in the morning at a refinery at Navodari, Constanta County. “It was a blast. Ambulances are being sent there, apparently there are two victims with burns,” Cosa stated.

Raed Arafat, head of the Department for Emergency Situations, told Reuters that there were “four victims, of whom one is missing. One has severe burns and two others have mild burns.” He added that the danger of further explosions was diminished as firefighters were working to put the fire out.

The government has advised people to not come within a one-kilometer radius of the plant, according to reports.

Footage taken from a nearby beach, as well as elsewhere in the vicinity of the plant, shows heavy black smoke emerging from the crippled refinery. In one photo the fire can still be seen raging at the base.

The Petromidia refinery is owned by Rompetrol Rafinare, part of KMG International Group which is headquartered in Bucharest.

Also on rt.com
Russia in final stage of negotiations with Egypt to build industrial park in Port Said

In a statement, Rompetrol said that the incident had occurred at the diesel oil refining installation. All technological processes had been halted safely and in accordance with internal crisis management procedures.

The refinery is less than a mile away from the beach and coastal resort of Mamaia, which sits on a thin strip of land between the Black Sea and Lake Siutghiol.