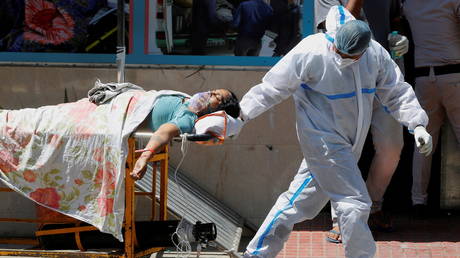 India has become the third country to have surpassed the 400,000 coronavirus death mark, but there is speculation that the number of fatalities is actually significantly higher.

On Friday India announced that it had doubled its official Covid-19 death toll since April. It’s estimated that around half of India’s 400,000 fatalities were amassed during the second wave of the virus.

However, questions have been raised about whether the official death toll is a true reflection of the dire situation in the country. Two notable studies from the Institute of Health Metrics and Evaluation (IHME) and the Economist have placed India’s death toll as higher than officially recorded. According to a study published by the British Medical Journal, the IHME study concluded that India’s Covid deaths in May had already passed 654,395 – almost three times higher than the official death tally reported at the time of India’s second wave. The IHME calculated excess Covid deaths by comparing what the average excess death rates were during the pandemic, and juxtaposing these figures with the number of excess deaths by season from previous years.

The Economist’s model took data from 200 countries, including deaths, cases and positive tests, as well as observations on how governments responded to the pandemic to find “relationships between these indicators and data on excess deaths in places where they were available.” Based on the modelling report, it was estimated that India had reached the one million-deaths-milestone in early May.

During this deadly period, India was plagued by a Covid strain much more transmittable than others – the Delta variant – causing cases to skyrocket domestically, and then later spread around the world. At the height of Delta’s terror in early May, the highest number of recorded cases in a day stood at 412,431 on May 5, with the recorded daily death toll also at 4,000.

Scenes of crematoriums burning around the clock in April and May became commonplace in India, as undertakers struggled to deal with the masses of bodies piling up from overwhelmed hospitals. At the same time, flooding around the Ganges washed hundreds of bodies of suspected Covid victims ashore on the river’s banks.

Also on rt.com
Dozens of bodies, many of them buried Covid victims, are washed from banks of India’s Ganges by seasonal floods & float downriver

Since the outbreak of the pandemic, India has reported an official total of almost 30.5 million coronavirus cases. This figure places India behind the US, which has recorded the most cases at 34.5 million.