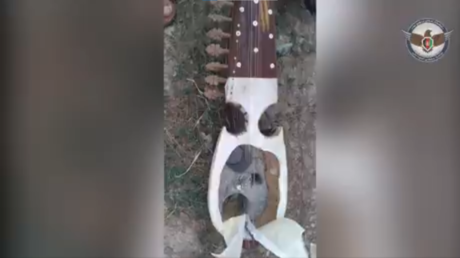 A man was arrested after he was caught attempting to smuggle explosives hidden in a musical instrument onto a plane at Afghanistan’s Herat International Airport.

Afghanistan’s National Directorate of Security (NDS) said in a statement on Friday that the suspected terrorist, Sayed Idris, had “skillfully planted a bomb containing RDX explosives, a hand grenade and chemicals in a musical instrument” and planned to detonate it on a flight from Herat to Afghanistan’s capital city Kabul. It said Idris was travelling disguised as an “artist.”

The plan was allegedly thwarted after a countercheck conducted by NDS at the airport revealed the hidden explosives.

Photographs released by the NDS showed the instrument and its discarded black case, along with a small vial of liquid which was hidden inside.

Terrorist attacks are not uncommon in Kabul. In May, a terrorist bomb exploded near a school in Dasht-e-Barchi, killing at least 90 people and injuring hundreds more.

On Friday, it was reported that the United States military had completely vacated the Bagram Air Base north of Kabul. The Pentagon will reportedly announce the formal conclusion of its withdrawal by the end of the week, though around 1,000 troops are expected to remain guarding the US Embassy and the capital’s airport.