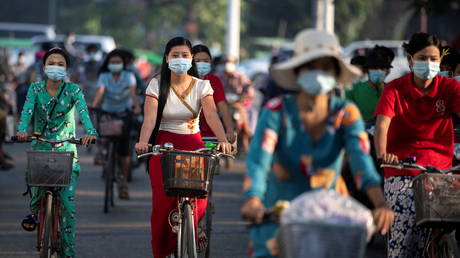 Residents of Myanmar’s second city of Mandalay, and two townships in southern Bago, have been ordered to remain at home to curb the spread of Covid cases throughout the country, as healthcare workers continue a post-coup strike.

In the last few weeks, Myanmar has seen Covid infections begin to climb, with 6,187 cases reported in the week ending June 28. On Thursday alone, authorities recorded more than 1,500 new cases, marking a significant rise from a month ago. The rising number of infections has sparked concern about a potential second wave spreading throughout the country, forcing the military junta to impose the restrictions.

The three areas placed under lockdown measures cover around two million people, according to the latest population data. Those locations include towns in Myanmar’s western Chin state, along the Indian border, which have been in lockdown since May.

The Covid measures forbid more than one person from leaving home for non-medical reasons, starting from Friday, with no end date set for the expiry of the new rules. The State Administration Council, which is what the military calls its government, issued the restrictions through its ministry of health and sports, only exempting government employees from traveling to work.

Myanmar’s healthcare system has struggled to contain the Covid virus amid widespread protests against the military’s coup in February and a subsequent strike by healthcare workers who oppose the junta’s rule. Medical professionals joined a general strike that began shortly after the military seized power, demanding a return to democratic rule within the country. According to UN figures, more than 139 doctors have been arrested and charged for opposing the junta’s actions. At least 158 attacks on medical personnel and facilities have been reported since February 1.

Since the start of the pandemic, Myanmar has recorded 159,347 confirmed cases of the virus, with 3,347 fatalities. The country of 54 million people has so far managed to administer 3,368,042 Covid vaccine doses, according to data provided to the WHO on July 2.