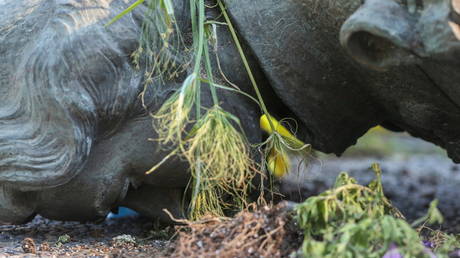 Protesters tore down several statues at the Manitoba legislature, including a bust of Queen Elizabeth II, during a heated rally on Canada Day, venting outrage over the discovery of unmarked graves of indigenous schoolchildren.

The activists gathered near the legislative building, located in the provincial capital, Winnipeg, to protest on Thursday, at one point descending on a nearby monument to Queen Elizabeth II and yanking it to the ground.

Statue of Queen Elizabeth II adjacent to Government House has also been brought down. pic.twitter.com/UCFZYYPKjy

Queen Elizabeth statue has also been torn down at the #Manitoba legislature in #Winnipeg. (Located on the east side.) @CBCNews @CBCManitoba #cbcmb #canadaday pic.twitter.com/CqDWDhGrPb

In addition to Elizabeth, a larger statue of the late Queen Victoria was also destroyed, pulled onto its side and defaced with red spray paint as activists cheered. That toppling was captured on video, after which activists left a sign reading, “We were children once. Bring them home” on top of the century-old statue, first unveiled in 1904.

Demonstrators toppled statues of Queen Victoria and Queen Elizabeth in Winnipeg this afternoon during rallies honouring the children discovered in unmarked graves on the sites of former residential schools over the past month. pic.twitter.com/Zx0aqPGcOW

While police made one arrest after the statues were brought down, the exact circumstances remain unclear, with the CBC reporting that the man may have shown up to criticize the protesters’ actions. No other arrests were made, though police in Winnipeg say their investigation is ongoing and that further action would be taken later.

The protesters, who reportedly numbered in the hundreds, headed for the legislature as part of the ‘Every Child Matters’ rally. The event was held to protest the dark legacy of Canada’s indigenous boarding school system after the remains of hundreds of children were discovered in unmarked graves in recent weeks.

Often run by the Catholic Church, many of the schools forcibly enrolled indigenous children under government mandates, aiming to assimilate native tribes even before Canada’s confederation in 1867. Children were taken from their families and were stripped of their cultural identities to hasten ‘integration’, many dying of abuse and neglect. The fate of countless indigenous students remains unknown, however, with the grim gravesite discoveries highlighting the massive scale of the abuses.

Also on rt.com
Two MORE Catholic churches in British Columbia go up in flames amid ‘anger and rage’ over school mass graves

Each find has fueled outrage among native communities and other Canadians, prompting calls to ‘cancel’ patriotic Canada Day celebrations altogether.

Some have apparently gone to more extreme lengths to protest the gravesites, as Catholic churches around the country have faced a spree of arson attacks. While police have not determined a motive in every incident, some are suspected to be linked to the indigenous grave discoveries.