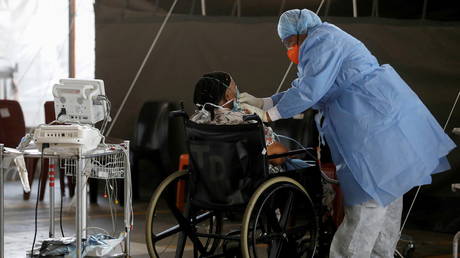 A record 24,270 new Covid-19 cases have been reported in South Africa, the country’s highest daily increase in infections of the entire pandemic, as it battles a third wave of the virus.

A further 303 Covid-19 fatalities were also reported on Friday, bringing the country’s toll to 61,332.

Amid South Africa’s third wave of infection, some hospitals have been overwhelmed and have run out of beds, particularly in the largest city, Johannesburg.

Shortages of medical staff have also reportedly been hampered by red tape, with more than 200 newly qualified doctors still left in limbo waiting for placements, according to the South African Medical Association.

South Africa also has a relatively low proportion – just 5% – of its population vaccinated compared to other countries. Its Covid-19 cases are largely caused by the more transmissible Delta variant of the virus, which has spread rapidly across the African continent in recent weeks.