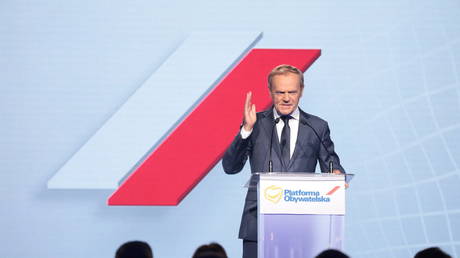 Donald Tusk has made a dramatic re-entry to domestic politics, after the former Polish prime minister and ex-president of the European Council was named the acting head of the opposition Civic Platform (PO) party.

Civic Platform’s national council elected Tusk vice-chair of the party, designating him acting head until an election to choose a party leader is held later this year. Tusk, who is currently chairman of the European People’s Party – the EU’s largest coalition of center-right parties – co-founded Civic Platform in 2001. In recent years, the liberal party has struggled at the polls.

Speaking before a PO party conference on Saturday, Tusk said he was “back 100%,” and wasted no time in taking aim at his old nemesis, the ruling Law and Justice (PiS) party.

“The evil that PiS is performing is evident, shameless and permanent. It’s happening every day, in almost every matter,” Tusk said. He accused the government of violating women’s rights, climate change denial, and mismanagement of the coronavirus crisis. The ruling right-wing coalition is also guilty of corruption and damaging Poland’s relationship with its EU partners, the veteran politician alleged.

Also on rt.com
‘He left when he should stay!’ Donald Tusk takes Brexit-themed jab at Cummings on Twitter

Tusk singled out PiS leader Jaroslaw Kaczynski, claiming that he was responsible for Poland’s “complete isolation” on the international stage.

Civic Platform is currently third in the polls, trailing behind PiS and another opposition party, Poland 2050. PiS, however, is facing problems of its own. Last month, the party lost its majority in parliament after three of its lawmakers defected to create their own independent parliamentary group.

While Poles aren’t scheduled to vote until 2023, it’s possible that the government could call for early elections to avoid a no-confidence vote in parliament.

As EU chief, Tusk was known for his outspoken opposition to Brexit, and often made headlines with his pointed criticisms of Britain’s decision to leave the European bloc.

In recent months, Poland has tussled with Brussels over a range of policy issues, including immigration and matters related to the country’s judiciary.