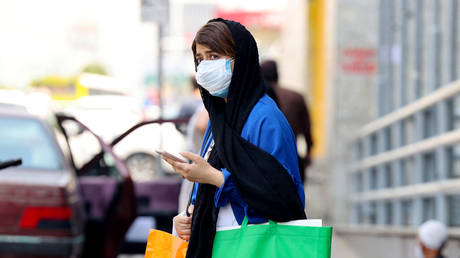 Iran’s outgoing president, Hassan Rouhani, has warned that the country will fall victim to yet another wave of coronavirus infections if authorities fail to stop the more transmissible Delta variant.

“It is feared that we are on the way to a fifth wave throughout the country,” Rouhani said at a coronavirus taskforce meeting.

The outgoing president urged governors and regional health officials to closely monitor the situation on the ground in accordance with Iran’s four-tier color-coded scale, where areas with the highest infection rate are classified as red.

“Unfortunately, today we are seeing an acute situation in the southern and some other provinces due to the spread of the Delta variant of the virus,” Rouhani said, warning that the number of ‘red’ cities will increase if health protocols are not followed.

Iran was hit by the three waves of the coronavirus last year, with the fourth wave arriving around early April.

The country’s capital, Tehran, has been listed as ‘red’, among other areas, according to AFP.

The spokesperson for the national coronavirus taskforce, Alireza Reisi, was quoted by IRNA news agency as saying that 92 cities are currently listed as ‘red’. He added that 183 are listed as ‘orange’ and 173 as ‘yellow’, which are the second-highest and third-highest tiers respectively in terms of the spread of the virus.

The Iranian government reported that 127 patients died from Covid-19 on Friday, with the overall death toll growing to 84,516.

More than 12,860 cases were recorded on Friday. Overall, Iran has had over 3.23 million infections since the start of the pandemic.