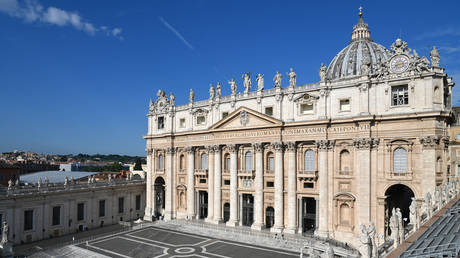 The Vatican will prosecute 10 individuals, including Italian Cardinal Angelo Becciu, in a case involving embezzlement and extortion. The indictments are seen as a historic crackdown by Pope Francis on Church-linked crime.

The Holy See announced on Saturday that Becciu and nine others have been ordered to stand trial for alleged crimes stemming from the Vatican’s purchase of a luxury property in London, as well as speculative investments that resulted in serious financial losses for the Church.

Among their co-defendants are the former heads of the Vatican’s financial intelligence unit, as well as two Italian brokers involved in the shady deal. Charges include extortion, fraud, and money laundering.

Charges were also brought against four companies associated with individual defendants. Two of the firms are located in Switzerland, one in the United States, and one in Slovenia.

Also on rt.com
As corruption continues to curse the Catholic Church, no wonder my 11-year-old would rather be a witch than a Christian

The trial will begin on July 27, according to a Vatican press release.

Becciu has now become the highest-ranking Vatican-based Church official to be accused of financial crimes. According to Christopher Lamb, Rome correspondent for the Catholic journal The Tablet, the cardinal’s indictment is without precedent.

“This is the first time a cardinal has been prosecuted in this way, and the decision to charge marks a new, and potentially decisive, step in Pope Francis’ reforms of Vatican finances,” he wrote.

As per Church law, the pontiff had to personally approve the decision to indict Becciu. The Italian cardinal has always maintained his innocence during the investigation into the affair, which began in 2019. However, he left a top post in the Vatican’s Secretariat of State last September after allegations of embezzlement surfaced.

The move comes less than a month after the Council of Europe’s top financial watchdog called on the Vatican to ensure transparency in procedures to prosecute senior officials accused of money laundering and other crimes. The Committee of Experts on the Evaluation of Anti-Money Laundering Measures and the Financing of Terrorism noted that the procedure for obtaining papal consent in order to bring legal action against senior clerics is “not fully transparent.”

In April, Pope Francis issued a decree allowing bishops and cardinals working in the Vatican to be judged by a lay tribunal. Before this reform, senior clerics were answerable only to a body of high-ranking Church officials, known as the Court of Cassation.