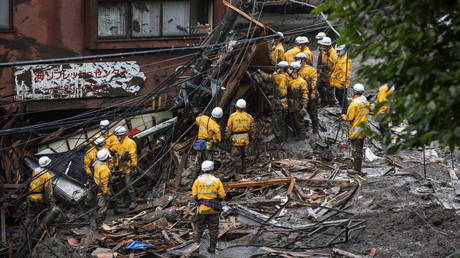 Following a landslide in Atami, a resort city southwest of Tokyo, a rescue mission is ongoing throughout Monday in the hope of locating the dozens of residents still missing. Three fatalities have so far been confirmed.

Japan’s Joint Staff Office, which is responsible for the country’s air, land, and sea surveillance, shared images of the rescue effort on Twitter, stating that, since 6am, the day’s first shift of 360 first responders had been scouring the area for survivors, using heavy machinery, drones, and rescue dogs.

The region’s mayor, Sakae Saito, announced that the whereabouts of 113 of the 215 residents was currently unknown. Since the announcement, the location of some 135 has been confirmed.

Red Cross Asia’s Pacific branch has also been contributing its resources to the recovery effort, providing blankets to evacuation centers in the area.

The landslide occurred after heavy rainfall in the region on Saturday. The amount of rain that day was more than the usual average for the region for the whole of July. Some 130 buildings were destroyed by the ensuing mud, which cascaded down the hillside without warning.

The prospect of further adverse weather conditions hangs over the region. More heavy rain is expected in the Shizuoka prefecture, with meteorologists warning that there could be yet another mudslide in Atami.