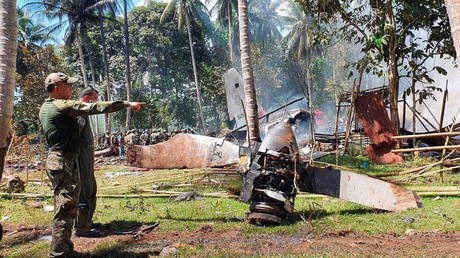 The Philippines’ Defense Secretary has ordered an investigation into the country’s deadliest military air crash in about 30 years, after the “very tragic” incident killed 47 military personnel and left 49 injured.

On Sunday, a Lockheed C-130 transport aircraft crashed and burst into flames on the southern Philippines island of Patikul, resulting in the deaths of 47 of the troops onboard, after it failed to touch down and overshot the runway.

The country’s Secretary of National Defense Delfin Lorenzana responded to the incident on Monday by ordering an investigation to find out what caused the country’s worst military air crash in three decades.

Military spokesperson Major General Edgar Arevalo told a news conference that the plane was believed to have been in “very good condition,” with 11,000 hours of flying time before it was set to receive its next maintenance.

It is currently unclear why the aircraft failed to land safely, as Arevalo stated that “according to available information the aircraft followed the specified protocols.”

Authorities have pledged to hold a “transparent” probe, which will publish the results of its investigation when completed. This commitment comes as officials are still searching for the ‘black box’ flight recorders that could provide some insight into what happened to the aircraft.

The plane, which was carrying 96 passengers, was travelling to the country’s provincial airport of Jolo to deploy the soldiers to battalions, protecting the country in its war against Islamist insurgency.

There have been a number of fatal aircraft crashes in Philippines’ military’s history. In June, a Black Hawk helicopter crashed, killing six people and forcing the grounding of the country’s fleet pending safety checks, in 2008, a Lockheed plane piloted by the Philippines Air Force crashed, resulting in 11 fatalities, and, in 1993, the crash of a C-130 left 30 people dead.