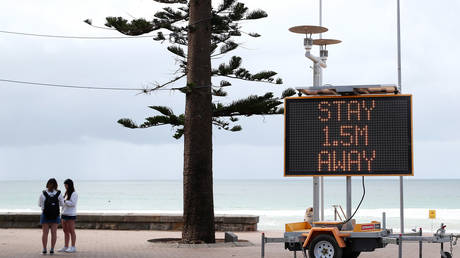 Officials in Australia’s most populous city, Sydney, have warned that the area is facing an “absolutely critical” 48 hours, as it fights to contain a Covid outbreak that has infected at least 300 people.

On Monday, after Sydney recorded 35 new domestic infections – the city’s highest number of daily new local cases this year – the New South Wales state premier, Gladys Berejiklian, stated that “the next couple of days will be absolutely critical.”

We expect the case numbers of people in isolation to keep going up.

The number of Covid-19 cases in Sydney has been rising recently as the highly transmissible Delta variant fuels the spread of the virus, despite Australia imposing severe lockdowns on the country’s four largest cities and parts of the outback.

Berejiklian said that, despite a two-week lockdown, people who are infected have spread the virus through community transmission in Sydney, including seven of the cases identified on Monday. However, she added that the lockdown had successfully limited new cases to the tens, rather than hundreds, that the area could have seen.

Addressing how officials will examine the impact of these new cases in the coming days and ahead of the end date initially set for the lockdown, the New South Wales premier suggested the restrictions might be extended if the infection levels are not brought under control.

The Delta variant, which was first detected in India in October 2020, has been identified in Brisbane, Darwin, Perth and the outback city of Alice Springs, prompting Australian officials to introduce new lockdowns on more than 10 million people.

Since the start of the pandemic, Australia has recorded 30,757 confirmed cases of Covid, with 910 fatalities from the virus, according to data provided to the World Health Organization. Under its vaccination program, the country has administered over 7.5 million doses of a Covid vaccine as of June 28.