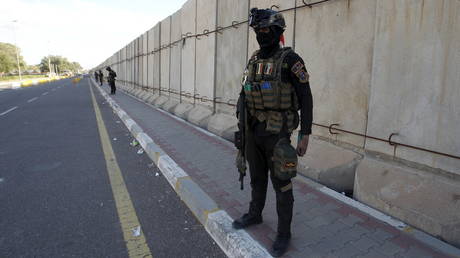 An explosives-laden drone was shot out of the sky by American air defenses as it neared the US Embassy in Baghdad’s heavily fortified Green Zone, Iraqi security sources said, soon after rockets targeted a base housing US troops.

The apparent drone attack came late on Monday night, Iraqi defense officials told AFP and Reuters, though noted the armed UAV failed to reach the embassy complex. It marked the 47th attack on American forces in Iraq so far in 2021, six of them involving drones, according to the French newswire.

???? There are reports from Iraq about an attack on the US Embassy in Baghdad. “Green Zone”, where the embassy is located, an air raid was triggered, after which the C-RAM (air defense) systems activated. According to so far unconfirmed reports, attack using a kamikaze UAV.#USA pic.twitter.com/QfA3Oviwpp

Unconfirmed footage of the shootdown has circulated online, showing US air defenses engaging a target in the night sky.

Strings of glowing tracer rounds could also be seen in the videos, over the loud rumble of exploding munitions from the American C-RAM defense systems, which appeared to fire off several volleys.

A drone was reportedly intercepted above the U.S. Embassy in Baghdad, incident took place about a hour ago. pic.twitter.com/vilCJru17J

Unverified photos purporting to show the remains of the drone have also made the rounds, depicting what appears to be a small quad-copter.

Initial reported image of the intercepted drone from this evening over #Baghdad, #Iraq.

Nothing showing on reverse searches so appears to be new, design is similar to previous drones as well. pic.twitter.com/1NFmDFbdEi

Images of the downed quadcopter that was intercepted over the Green Zone of #Baghdad #Iraq ?? pic.twitter.com/B2Z37cbN1u

The reported drone attack came just hours after three rockets slammed into the Ain al-Asad airbase in Iraq’s Anbar Province earlier on Monday afternoon. Colonel Wayne Marotto, spokesman for the US-led military coalition, noted that the strikes caused no deaths or injuries, adding that damage to the base was still being assessed.

Initial report: At approx. 2:45 PM local time, Ain Al-Assad Air Base was attacked by three rockets. The rockets landed on the base perimeter. There are no injuries and damage is being assessed. For more information see @SecMedCell

The same base, which houses American soldiers, has come under attack repeatedly over the years, with an armed drone targeting the installation last May. Ain al-Asad was also pounded by Iranian ballistic missiles in January 2020, inflicting brain injuries on several US troops, after the US assassination of Quds Force commander Qassem Soleimani near the Baghdad airport days earlier.

While Monday’s drone and rocket attacks were not claimed by any actor, and Washington has yet to lay blame, it often pins such operations on Iran-backed Shia militia groups operating across Iraq and Syria, known collectively as the Hashd al-Shaabi, or the “Popular Mobilization Forces.”

Late last month, President Joe Biden ordered a series of strikes on facilities used by two Iranian-backed militias in Iraq and Syria, Kata’ib Hezbollah and Kata’ib Sayyid al-Shuhada, claiming the move was meant as a “deterrent” against future attacks. Baghdad, however, condemned the operation as a “blatant and unacceptable violation” of its national sovereignty, a common complaint throughout the 18-year US occupation.