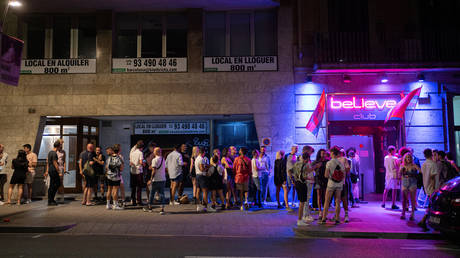 The regional government in Spain’s Catalonia has announced that it will reimpose health restrictions on nightclubs amid a spike in Covid cases, which have pushed up the infection rate in the region.

From Friday onwards, Catalonia nightclubs and bars open until late will close their doors. A spokesperson for the regional government, Patrícia Plaja, said “we must take a few steps back” and “we can’t pretend to have defeated the virus” as cases skyrocket in the region.

While certain venues will be forced to shut under the measure, outdoor bars can remain open until 3am, and events with up to 500 attendees will still have the green light to go ahead. However, attendees must prove they are Covid-negative or fully vaccinated.

The decision to impose the new restriction comes after Catalonia reported its R number – meaning the average number of people that one infected person passes the virus on to – has increased to 3.30.

Spain’s national Covid vaccine rollout focused first on essential workers and the most vulnerable, before moving down in age to younger members of society. As a result, younger people there are transmitting the virus at a faster rate, according to recent data.

Figures from Catalonia’s health department show that under a quarter of the region’s 30- to 34-year-olds have received one dose of a coronavirus vaccine, while just 0.8% have received two doses.

Catalonia is not the only Spanish region temporarily ordering nightclubs to shut. In Cantabria, late-night venues in 16 towns were ordered to close to curb infection rates.

Spain began to ease Covid lockdown restrictions on nightlife across the country in stages, with venues in Catalonia welcoming clubbers back on June 21, on the condition clubs could operate at half capacity until 3am. Not long afterwards, the federal government officially lifted the law requiring masks to be worn outdoors.

The country has seen a rapid increase of coronavirus infections in the last week alone, with the daily case rate averaging 10,548, according to data from Johns Hopkins University. The recent cases bring Spain’s overall total of confirmed infections to 3,821,305 since the pandemic began.