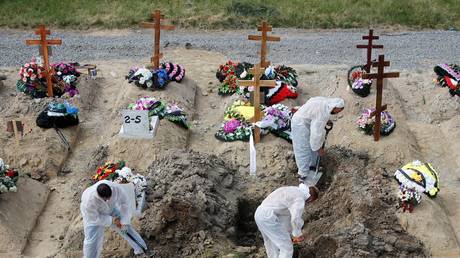 The World Health Organization (WHO) has announced that the coronavirus pandemic has claimed four million lives since its outbreak. However, the UN agency suspects that the actual number of fatalities could be much higher.

“We have just passed the tragic milestone of four million recorded Covid-19 deaths, which likely underestimates the overall toll,” WHO chief Tedros Adhanom Ghebreyesus told a press conference on Wednesday.

The amount of time between each million deaths has been shortening. The first million fatalities occurred in September 2020, nine months after the pandemic’s outbreak, with another million recorded within the next four months, and yet another by the end of April 2021.

A further million Covid-related deaths have been logged in the subsequent three months, according to the latest WHO data.

Ghebreyesus again raised alarm over Covid vaccine disparity between wealthier and poorer nations, urging greater collaboration among countries to combat the pandemic “from a moral, epidemiological or economic point of view”.

His remarks come as a handful of European governments have either eased their restrictions, such as France, or ditched domestic measures completely, like Iceland, or intend to in the near future, like the UK.

However, many countries in Asia, Africa and South America are struggling to contain the virus as it wreaks havoc on their healthcare systems. More than 30 people died in Indonesia following a shortage of oxygen supply in a hospital in Yogyakarta city on Saturday.

The WHO is not the only medical body to express its belief that the real Covid death toll may in fact be much higher than officially reported. A study by the Institute for Health Metrics and Evaluation (IHME) at the University of Washington published in the British Medical Journal in May claimed that the then-reported toll of 3.27 million was too low. Instead, global deaths from Covid were estimated to be just shy of seven million – double the official number.

In order to reach its estimate, the IHME calculated Covid deaths by comparing average excess death rates throughout the pandemic, and then contrasting these numbers with each season from previous years. The study found that the chief countries estimated to have a higher death toll than officially logged are India, Egypt and Mexico.

Under the official figures, the USA has recorded the highest mortality figures of the pandemic with over 600,000 deaths, according to WHO data. Brazil follows second with over 525,000 fatalities, and India third with over 403,000.