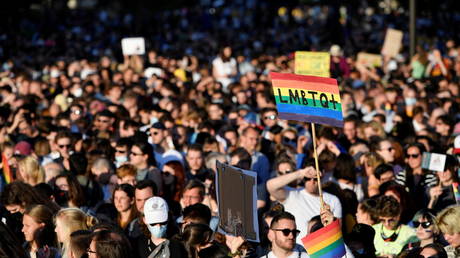 President of the European Commission, Ursula von der Leyen, has slammed Hungary’s anti-LGBTQ law as a ‘disgrace’ and has implored the country to reverse it or face punishment.

Von der Leyen strongly condemned Hungary for its decision to proceed with enforcing the controversial anti-LGBTQ law, as it came into force on Wednesday. Speaking in Strasbourg’s European Parliament, she said it used “the protection of children…to discriminate against people because of their sexual orientation,” which she called a “disgrace.”

The president of the European Commission also took to Twitter to further criticize Hungary’s law, confirming that “Europe will never allow parts of our society to be stigmatized.”

We cannot just stand aside while whole regions declare themselves as ‘LGBTIQ free zones’.

Europe will never allow parts of our society to be stigmatised.

To demonstrate that these claims are not just empty promises, Von der Leyen made a stern remark that the Commission will use its power against Hungary if the country does not ‘rectify’ the law. Whilst it was not specified what such punishment could entail, recent debate signals that the central-European country could face economic sanctions, with EU payments to Hungary being frozen due to violations of the bloc’s regulation, which ties funds to the member-state’s rule of law.

There are many places in the world where you can earn a good living and do great business.

However, when it comes to living in peace and freedom there is no better place than Europe.

Europe is diverse. Europeans are diverse.

Yet, we stand together. pic.twitter.com/gpFWEOuhTL

Hungary’s anti-LGBTQ law that bans the “display or promotion” of homosexuality or gender reassignment surgery in school sex-education lessons, films or adverts to people under the age of 18. The government says it is aimed at protecting children. However, many have criticized it for being harmful and discriminatory.

14 EU member states have previously criticized Hungary when the law was first announced earlier in June. The countries signed a joint statement, expressing concern that it “represents a flagrant form of discrimination based on sexual orientation, gender identity, and expression and hence deserves to be condemned.”

Out of the 27-strong EU bloc, only Slovenia and Poland have openly sided with Hungary on the law.

Not only was strong opposition seen in the EU parliament amongst member states, uproar was shown domestically in Hungary. Thousands took to Budapest’s streets on June 14 ahead of the MP’s casting their vote to pass the notion the following day.