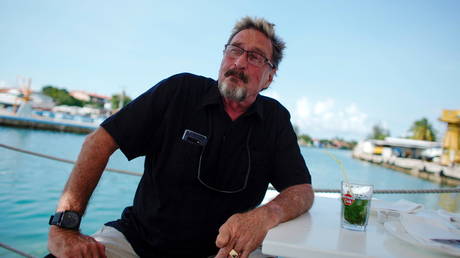 John McAfee’s death in a Spanish prison has been ruled a suicide, but the late software tycoon’s wife isn’t sure. Janice McAfee says that the flow of information from Spain is slow, and “there is clearly a cover up happening.”

McAfee was found dead in Barcelona’s Sant Esteve Sesrovires prison last month, and a preliminary autopsy found that he died by hanging himself. His extradition to the US, where he faced charges of tax evasion and other financial crimes, had been approved by Spanish authorities hours before his death.

Janice McAfee immediately suggested that the US government was behind her husband’s death, and on Wednesday claimed that a “cover up” was taking place.

“There has been no since (sic) of urgency from the various Spanish authorities involved in the investigation into John’s death and there is clearly a cover up happening here concerning the events surrounding his death,” she tweeted.

“We have not received the death certificate, the official autopsy report or the official report from the prison,” she continued. “I understand that things take time but the lack of cooperation from the Spanish authorities only confirms our suspicions that they have something to hide.”

A popular outlaw figure online, McAfee led a colorful life. He bragged about not paying taxes as he sailed around the Caribbean and launched two unsuccessful runs for the US presidency as a Libertarian. Trouble with the law usually followed McAfee, and the antivirus pioneer was arrested as he fled to Guatemala in 2012 after the death of his neighbor in Belize a month earlier. McAfee was deported to the US and never charged with murder, but was arrested again in 2019, this time for transporting weapons to the Dominican Republic.

McAfee claimed on several occasions that he would be killed in prison and the murder made to look like suicide. He even had a tattoo inked on his bicep with the word “whackd,” and tweeted in October that if he were to “hang [him]self, a la Epstein, it will be no fault of [his].”

However, a Spanish newspaper report last month claimed that McAfee tried and failed to kill himself in prison back in February.