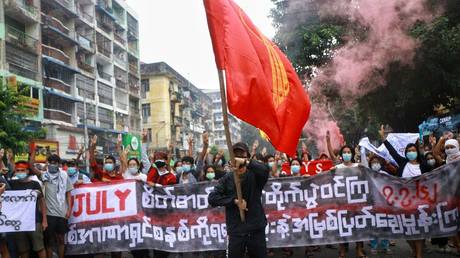 Protesters have taken to the streets of Myanmar on the 59th anniversary of major student-led demonstrations against the country’s first military government, echoing a similar condemnation of the current regime.

On Wednesday, people across the politically volatile country flocked en masse to protest against the junta government. A domestic anti-government group, the Civil Disobedience Movement, shared an action shot of marching protesters, captioned: “Channeling the spirit of student activists before us, we are marching today once again to end the military dictatorship once and for all in Myanmar.”

Channeling the spirit of student activists before us, we are marching today once again to end the military dictatorship once and for all in Myanmar. #WhatsHappeningInMyanmar #July7Coup pic.twitter.com/xVrPqsXy1T

Protesters could be seen walking through the streets of Myanmar’s largest city, Yangon, where the 1962 rallies took place when the city was named Rangoon.

Protest against military rule in Myanmar in Yangon on the anniversary of bloodily suppressed protests against the then junta in 1962 #WhatsHappeningInMyanmar pic.twitter.com/tTVVBuS7l5

The 1962 Rangoon University protests were a wave of demonstrations and marches against stricter measures on campus. They were violently suppressed by the military government. According to unofficial statistics, the incident resulted in 100 deaths, although the government claims as few as 15 died, and 6,000 arrests.

Myanmar has experienced waves of instability this year, following a military coup at the beginning of February, which ousted democratically elected leaders. Mass protests across the Southeast Asian country subsequently saw thousands of people detained and many killed.

A non-profit organization, the Assistance Association for Political Prisoners (Burma), has estimated that as of July 6, 894 people have been killed by the junta, and just over 6,500 people have been arrested.