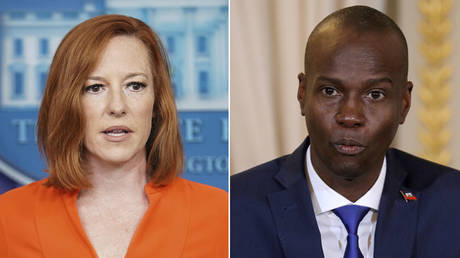 White House Press Secretary Jen Psaki has offered the Biden administration’s condolences to Haiti after President Jovenel Moise and First Lady Martine Moise were assassinated in their home on Wednesday.

In a Wednesday interview with CNN, Psaki called the assassination a “tragic tragedy” and a “horrific crime,” and declared that the White House is “sorry for the loss that they are all suffering and going through.”

Psaki also added that the US was ready and available “to provide any assistance that’s needed,” and revealed during a separate interview with MSNBC that President Joe Biden would be fully briefed on the incident later in the day.

The president and first lady were reportedly attacked at around 1am on Wednesday by “a group of unidentified individuals, some of whom spoke in Spanish.” Haitian news outlet Le Louverture went on to identify one of the assassins as Colombian, however this is currently unconfirmed.

Haiti’s Prime Minister Claude Joseph condemned the “odious, inhuman and barbaric act” in a statement, and called on Haitians to be calm, claiming that measures were being taken “to guarantee the continuity of the state and protect the nation” and that “democracy and the Republic will win.”

Neighbor the Dominican Republic has allegedly responded to Moise’s assassination by ordering the closure of its borders with Haiti and ramping up surveillance.