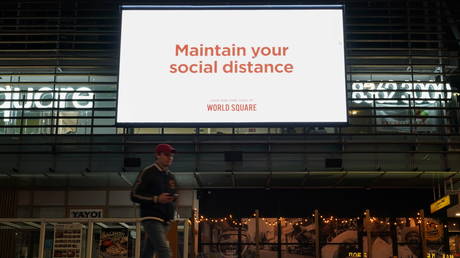 Australia’s most populous city will undergo another week of lockdown after 27 new infections linked to the more contagious ‘Delta variant’ were discovered, forcing many of Sydney’s 5 million residents to remain at home.

“The reason for this is as we’ve been saying, this Delta strain is a game-changer. It is extremely transmissible and more contagious than any other form of the virus that we’ve seen,” Berejiklian told reporters in Sydney, the state capital.

The move comes after 27 new locally transmitted coronavirus infections were detected in New South Wales, up from 18 one day earlier. Around 20 of the new patients reportedly remained in isolation while they were infectious, though the other seven were said to have spent time in public during the same period. In total, the state has tallied some 350 cases since June 16, according to Reuters.

The premier added that she hopes the restrictions – which include school and business closures, as well as stay-at-home orders – will be Sydney’s last lockdown before “the vast majority of our citizens are vaccinated.”

Sydney is one of four major Australian cities plunged back into lockdowns in recent weeks, with officials in Brisbane, Darwin and Perth taking similar steps amid the spread of the Delta variant. In late June, Queensland Premier Annastacia Palaszczuk argued the new outbreaks were fueled by “overseas arrivals,” suggesting they had brought the more contagious mutation into the country.

Since the coronavirus pandemic kicked off in late 2019, Australia has tallied just over 30,000 infections and around 900 deaths, remaining far below global hotspots like the US, Brazil and India.