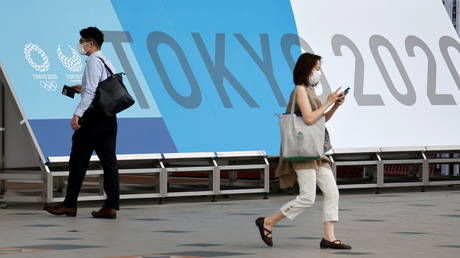 A new state of emergency is set to be declared in Tokyo, the Japanese government has decided, amid a rise in Covid-19 cases less than three weeks before the capital is due to host the Olympic Games.

The measures will be applied in the Tokyo area from July 12 to August 22, Prime Minister Yoshihide Suga announced on Wednesday.

Suga said the number of people in Tokyo infected with Covid-19 is on the rise, and the emergency measures – less strict than a full lockdown – should help to control the spread of the virus and alleviate the pressure on hospitals already struggling to provide enough beds.

The PM told reporters he would “take all possible measures” to prevent the further spread of the virus.

Tokyo reported a further 920 Covid-19 cases on Wednesday, its highest daily total since May 13.

The state of emergency has also been extended to Okinawa Prefecture, while quasi-emergency measures for Osaka, Saitama, Chiba and Kanagawa prefectures will also be extended until August 22.

A formal decision on Tokyo’s state of emergency will be announced on Thursday after a meeting of health experts.

Tokyo is set to host the Olympic Games from July 23 until August 8 – a year later than originally planned due to a postponement caused by the pandemic – but there has been wide public opposition to the huge sporting event and a domestic campaign for it to be canceled.

Also on rt.com
Tokyo governor taking a week off, suffering from ‘excess fatigue’ as Olympics loom and Covid-19 lingers

A number of media outlets reported on Wednesday that the Olympics was likely to go ahead without spectators, although Suga’s announcement did not confirm this.

Kyodo News, citing a senior government source, said that the Games would be held behind closed doors.

Olympics organizers have already imposed strict limits on the Games, including banning overseas spectators and limiting the number of fans to 10,000 or half of each venue’s capacity.

Some of the 11,000 athletes from the 200 Olympic participating nations have already started arriving in Japan.