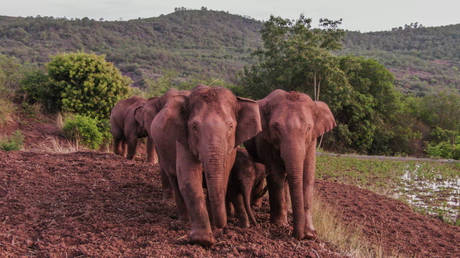 A bull who separated from China’s famous herd of trekking elephants had to be captured and taken all the way back to the nature reserve from which the animals set out months ago, the local authority has said.

The 10-year-old male was part of a travelling group of over a dozen endangered Asian elephants that became an international sensation last month. He detached from fellow wanderers on June 6 and went off on his own, trekking more than 190 kilometers solo.

“Since Monday, the elephant has entered a community in Yuxi city, only 300 meters from the Jinhong Highway and 200 meters from the Kunyu intercity rail, posing a high risk for public security,” wildlife protection officials in the southern Yunnan province reported.

The 1.8-tonne animal was tranquilized and shipped some 280 kilometers away, back to the Xishuangbanna National Nature Reserve, from which the herd departed months ago to begin their long march north.

An Asian elephant that strayed from a herd that has been wandering across China’s southern fringes since March 2020, has been sent home. The animal travelled more than 190km on its own. pic.twitter.com/3LMpwUqsHX

The official notice said the now-resettled elephant had to rely on food provided by local governments or by foraging at local villages, before being captured. Footage released by state broadcaster CCTV showed the bull grazing in a forest and drinking water.

The rest of the herd, which currently includes 14 elephants, remains in the forests around Yuxi. A team created by the local government, to monitor them and steer them away from major population centers, follows the group, which has been gradually shifting towards the south lately.

The herd drew international attention after getting close to the provincial capital, Kunming. Their progress necessitated a massive response from the provincial government, involving evacuations of villages in their path and a task force of some 200 people operating a fleet of drones.

The elephants caused an estimated $1.1 million worth of damage as they ransacked food storages in villages they visited and, on one occasion, depleted a settlement’s reserve of booze.

The story of the roaming elephants quickly went viral globally, with some China watchers arguing that Beijing has “weaponized” the animals to score some good publicity.

Why exactly the elephants took off from the nature reserve remains a mystery, but some experts believe they felt a pressure to move out due to a growing population and shrinking habitat. China’s preservation efforts have helped double the number of Asian elephants to over 300 in the past three decades. But the size of territories where they can live comfortably in the wild has reduced by almost two-thirds over the same period as forests were turned into plantations.